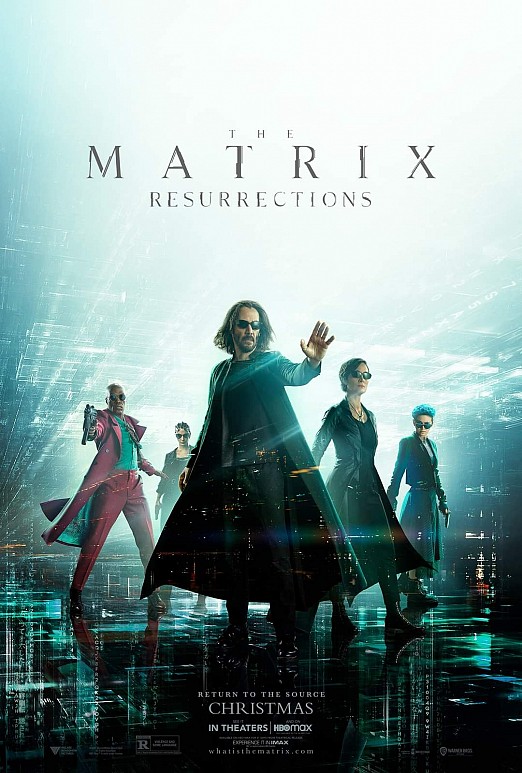 Just when the movie ended, a person watching the film turned and said “This is not The Matrix. What is this?”. He seemed really disappointed and this is when it clicked, when everything made sense. As the film progressed I became less and less enthusiastic about it but at the end my perception entirely flipped around. This was never supposed to be The Matrix “4”, and us expecting it to be that is where us and the film shoot ourselves in the foot. The Matrix Resurrections asks the question “what’s the deal with those revivals of old franchises? Why do they work? Could they exist without the surplus nostalgic value?”

Allow me to cover the technicalities before I dive into the film’s heavy weight. The film is way too long. They could’ve cut useless minutes from it. The direction is solid. I did not expect anything less. Unfortunately, the action scenes were not well-made. The choice of fast cuts and tight shots did not help at all and made them seem generic. In fact, the film’s action scenes are very generic – they were fun, but nothing ground-breaking. Do you know how where in every film when characters have to execute a plan the filmmakers do this montage of people debating the plan and cutting back and forth to the actual execution while a monotonous musical track plays? Well they did it in this film and I wish they hadn’t. The CGi were excellent but the green screens were not. Honestly it seems nowadays that no one is putting any effort into making the green screens believable regardless of the budget. The music was great.

The acting was really good. Jessica Henwick was underused, sadly. Keanu Reeves coming back as himself- I mean as Neo was a pleasure. Carrie-Anne Moss slayed as Trinity. Yahya Abdul-Mateen II overdid it as Morpheus but he got the point across. The guy who played Agent Smith was not good; Hugo Weaving was dearly missed. Neil Patrick-Harris was great.

When it comes to the actual story of the film, it does not add anything major to the originals except for a retrospective viewing and understanding of the story. It does not ruin the originals or make them better. The film had to exist and instead of going with the cheap and safe direction, a very interesting approach was taken – which I’ll explain later. The story transcends classical storytelling by favoring the art project’s purpose over its presentation. The film tries to fill in the gaps between the current film and the originals. The scenes did not really benefit the film and they felt like long exposition which it could’ve lived without – even though they played a good role in the film’s philosophy.

Now onto the bittersweet state of The Matrix Resurrections: it’s too smart and too heavy for blockbuster cinema.

The original Matrix film is nearly perfect. It had it all. The sequels were slightly lackluster yet had enough material to make them interesting. As the years passed, The Matrix Trilogy grew in popularity, fame, and now has a special place in pop-culture, cinema history, and academics. Like all cultural franchises, every audience member related to an aspect of it and considered it “their Matrix” – or their perception of The Matrix. The Matrix Resurrections challenges the control of the fan-base over the franchise and the filmmaker reclaims her vision and expresses her frustration with the system.

What this film shatters is the current state of cinema. What Resurrections does is that instead of taking the pre-requisite nostalgic baggage associated with the original franchise and creating an emotional comforting (and numbing) junk food experience, it expresses an internal rebellion against the state of franchises and studios’ obsession with rebooting or continuing old franchises. Simplest example, “Star Wars The Force Awakens” is a nostalgic fiasco that takes its power in the comfort of nostalgia. Whereas The Matrix Resurrections keeps nostalgia to a bare minimum and decides to drive the philosophical importance of the franchise. Here is the thing, The Matrix was always philosophy in action (both literally and metaphorically). Sure, it had its place in redefining sci-fi and action filmmaking, but it was always about the philosophical ideas it juggled and expressed - and some of the best and coolest action and martial arts sequences which this film severely lacks. The Matrix Resurrections decides to comment on the state of cinema as a critique of itself and the industry. The film gets extremely meta in the first hour and says so many things about itself, the franchise, and the industry. What happens throughout the film is that it makes you decide, without knowing, what cinema and The Matrix mean to you: are you here for the action and nostalgic experience you got while watching the originals? Or do you wish to go down the rabbit hole and expose yourself and why you came back to watch this film and every rebooted/recycled franchise, and gain so much in the process? [if you didn’t like the film for not being like the first ones, remember that the truth is painful]. This is The Matrix Resurrections. And although the film comments on the cinema industry now, and even though it rebels against it, it ends up reproducing what it tries to avoid in order to be valid. The ending is what makes the film slightly hypocritical. Oh and the after credits scene was perfect – it really speaks volumes.

Where the first films were about liberation from the construct of life (and ideological experiences we invented for ourselves), this film is more about the cinema industry and a commentary on current social change. I should add that there was a lot of commentary about storytelling and why it’s in its current state and why it’s important.  With the first part of the film covered, the second aspect of The Matrix Resurrections falls into the so-called “woke” category - a terrible term that internet trolls created, it’s a useful word but terrible in that it’s too superficial and doesn’t really understand what it is referring to. The film tackles the notion of “binary”: good vs evil, the binary constructs of gender, the choice between two things [it somehow becomes Hegelian, in that instead of having to choose a thesis or an antithesis, it’s time to consider the synthesis and challenging that synthesis itself, etc… In addition to feminism. The moment the film starts to comment on these issues, you immediately become aware of the messages it is trying to convey, and sadly it doesn’t rightfully develop them and they could have been given more time. They also felt like they belonged to another film or a previous version of the original film. Nevertheless, they made sense and did not feel as forced as other films - the film was foreshadowing them regularly.

That’s everything The Matrix Resurrections without going into spoilers or story details. It certainly shoots itself in the foot by being this antithesis for current resurrections of previous franchises and characters, but it does it for the right purpose, and I hope people appreciate it. Was it done in the best way possible? No. Was it painful? Mildly. But it will be a film looked at much more positively in the years to come.