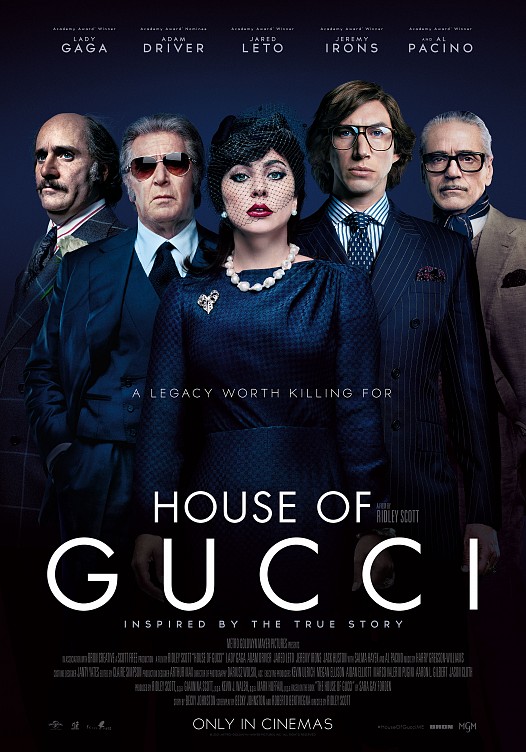 The soapy saga of Patrizia and the Guccis - 7/10

This film was surprisingly good. It has this weird vibe and an inconsistent tone but it somehow rises above the messiness to become a solid biopic of a very bizarre story populated by a set of equally bizarre characters.

Ridley Scott’s latest film adapts the real story behind the Patrizia Reggiani and her life inside the Gucci family. This long biopic suffers from major issues that somehow did not impact its integrity, and that’s a miracle.

Starting from Ridley Scott’s direction, it was bland and without style yet somehow fitting and with the right energy and craftsmanship to carry the film. The story could’ve used a better and more dynamic cinematic language but the “TV-style” approach felt somehow fitting as the story has soap-opera elements that fit in with the directional style (and editing). The choice of lighting in this film really fit the story and characters and created a very good mood. And here is the thing with the film, we are not following traditional good guys as protagonists. The morality is nasty and muddled which brings me to this film’s actual story: it’s partly a soap opera, partly a crime film, and partly a neo-noir film in color with the femme-fatale as the central character and not the victim male as the protagonist. To see a character like Patrizia leading the film was an amazing experience. She’s a fierce and intelligent woman – not to idolize, but to admire. And Lady Gaga… what a star! She killed it! I cannot praise her enough. At her side, Adam Driver played Maurizio Gucci and there is no one better to play a masculine man with a soft and non-alpha heart. He had great chemistry with Lady Gaga. Al Pacino delivered a terrific performance. He dominated the screen. Jeremy Irons was great. Now… here’s where things get weird: Jared Leto as Paulo Gucci is worth the admission ticket. He’s hilarious. He was not supposed to be funny but every time he’s on screen, he was comical. I couldn’t stop giggling. The guy was just having fun in a very serious film and he brought in a whole lot of entertainment that I don’t think he was supposed to be bringing. Him and Pacino made the most bizarre sight of the year – the ultimate comedic duo! I really disliked the accents in the film, and the occasional mixing of basic Italian words in conversations. For example, they’d say Buongiorno in the beginning of a sentence and continue in English (not to miss the Ciaos and the Come Vas) with an Italian accent that comes and goes.

House of Gucci is a long film with a weighty runtime that is felt. Now the good news is that the film is not boring. The plot is always progressing and consistently rich with details and events. Throughout the 2h 38m runtime (2h 30m minus the credits), the pacing is even. The biggest problem in terms of pacing and boredom factor, is that the movie becomes somewhat boring towards the end where the story’s focus becomes less about Patrizia and Maurizio together. Their synergy carried the film for about 2 hours of its runtime. The film struggles to find an ending and it feels somewhat abrupt, yet logical. But do not worry, you will leave the theater satisfied.

The editing in dialogues was really smooth and well-done. The cutaways in many moments to jump forward in time or change scenes ended up being comedic edits and not narrative ones (although they were, but the feeling was not). The green screens were not so good, but other CG elements were well-made. The choice of music was not the most inspired. I have to praise the production design and costumes – it’s an elegant film. It’s Gucci, it has to be.

One thing to add is the film’s tone which fluctuates between being a drama and a comedy: it was a mess yet somehow did not affect the film’s flow or entertainment factor. In fact, it made the film become bigger than what it is, like a fable or some sort of otherworldly tale.

In the end, House of Gucci was a very interesting film and a very bizarre experience. It's honestly one of the best films I've seen in theaters this year. I also have to say that watching House of Gucci on the big screen made it a better experience.