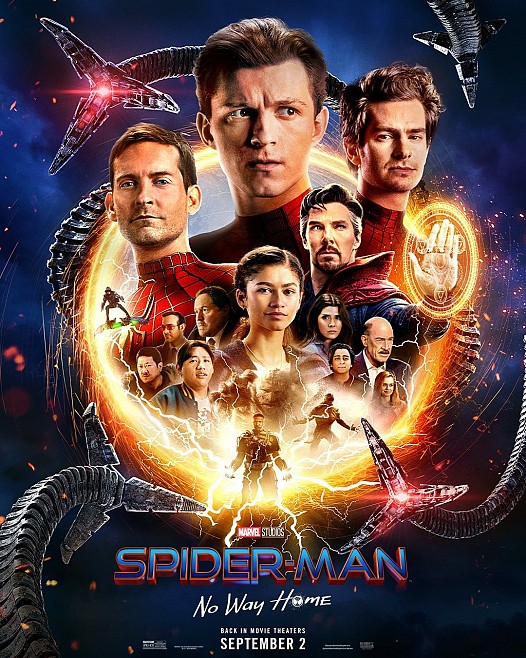 The latest in entry in the MCU’s Spider-Man High School trilogy picks up right after Far From Home ended and decides to reduce, reuse, and recycle instead of taking responsibility and attempting an original story. Nevertheless, what we got was a heartwarming film that feels like a fan convention rather than an actual film.

If you have seen the trailers, the film reuses old villains from previous adaptations of Spider-Man and incorporates them into the story when the writers decide to low-key abandon what they have established in Far From Home. What the film should have dealt with is Peter Parker dealing with his identity as Spider-Man being exposed… and the film does that really well (minus the terrible Marvel humor) in the first 30 minutes of the film, then they shove in the plot’s multiverse trigger point and the film turns into something else entirely but it is still linked to the film’s basic premise.
This film felt different from the previous entries by being the most stand-alone in terms of being an actual Spider-Man film without heavy MCU elements at play (except for Dr Strange), and it benefitted from this. The film follows the usual structure of any MCU film: same formula, slightly different results and that’s because of many spoilery things I cannot mention. I have major issues with the ending which, if you think about it, makes you question the entire film’s necessity and specifically one aspect of it.

Now the most surprising thing was how they really created a beautiful arc for Peter that really develops him – I cannot say more to avoid spoilers. And this very Peter-focused direction gave No Way Home a different flavor that was reminiscent of the Raimi films.
The villains were a hit and miss. Alfred Molina as Doctor Octopus was a simultaneous hit and miss - but is it good to see him back! Electro, although he was better, feels like Jamie Foxx was acting from home on a zoom call. Sandman stuck well with who he was from Spider-Man 3 until, well, the third act. Lizard was useless. But… but Willem Dafoe had no right being this good. The Green Goblin was given a much deeper story that was really beautiful. Willem Dafoe just kicked some ass, what a presence!
Doctor Strange was weirdly handled in this film; I did not like his portrayal nor actions.
Ned and MJ were slightly shoved to the side. The writers took Ned’s character in an unexpected but problematic direction.

The visuals were good, I’d say. It’s just you do not expect bad visuals from a film with a budget this big, and it lives up to its budget I guess. The visual effects were better than some MCU films. The actions scenes were fun but nothing groundbreaking. The music was decent.

There are a lot of plot holes and inconsistencies but the film is an emotional spectacle that pushes away these terrible mistakes. And this is my beef with this film: its sense of goodness comes from the baggage it is carrying. The stand-alone elements work (and some of them were forced), but the juice is in the recycled material. The film’s first act set up a potential great and stand-alone adventure and it could have been a unique Marvel film, but sadly they went in an entirely different direction that wasn’t bad but, well, not the most inventive.

Did I have fun? Yes. Fun is what matters nowadays I guess. And No Way Home feels like a great Holidays treat that will surely please long-time and new Spider-Man fans alike.

*keep an eye out for a lot of old Spider-Man films [and now meme] references, and also make sure to stay for the great post-credits scenes.