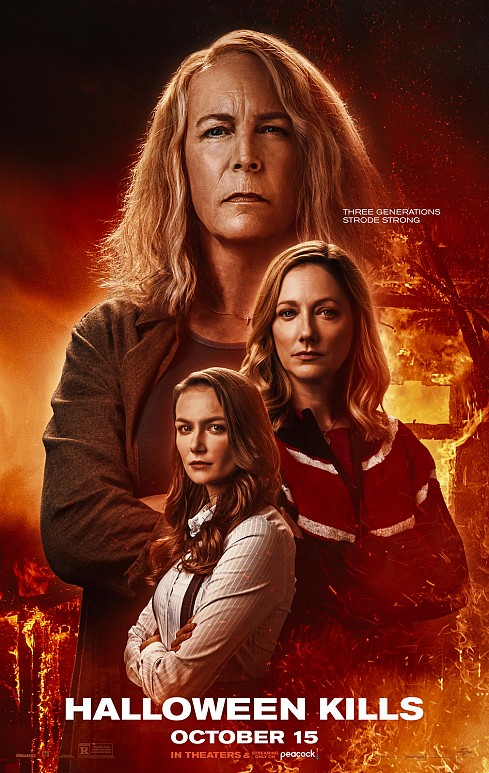 Right off the bat, Michael Myers is on steroids in this film. If you’re a fan of The Shape, the film delivers the usual bloody kills starring the one and only Michael Myers. This film said let’s go all out on the kills that by the end of it you become desensitized “oh, he killed again. anyway”. 8t’s a bloody carnage. the kills aren’t as creative as the last film’s - quantity over quality. If you enjoy a good old slasher, Halloween Kills has these elements but do not expect to root for anyone or feel invested in the story.

The film’s issues fall into two elements: the writing and the editing.

The script is a mess, and when i say it’s a mess i mean it’s really messy. The film has a no-direction structure (that works but) with constant jumping from a scene to another with characters delivering cringe-worthy and out of place lines. In a way the script feels like a first draft; it needs so much work. The film takes its time to introduce a lot of elements that feel independent from the 2018 and the 1978 film even though they happened during both films but “off-camera”. This made the 1978 film and the 2018 film distant from this directed sequel. The flashbacks were really cool, best part of the film in my opinion, but the way they blended with Halloween Kills was not well-made. It felt interesting to see the effect that Michael has on Haddonfield but the execution felt too exaggerated. The film makes some anarchist commentary along the way and some throwaway lines that target american culture. The film is in many ways relevant.

Halloween Kills has a nice prologue and the last act is acceptable with a very shocking send-off.  The filler in the middle was just…. yawn. Sure, there are scares that give you a little wake up call but * was not invested. I only cared about the Strodes and they were pushed aside for most of the film. Not to forget some dumb character decisions which made me sigh. Dumb character decisions are a horror trademark but it’s overused at this point. I gotta appreciate this sequel for being somehow original but it totally fell into an abyss of its creation, an unbalanced narrative that shouldn’t have been this long.

The editing was annoying: the jump cuts, the montages, the inter-cutting between scenes. They didn’t help the film at all. one thing that struck me as very good was the use of seemingly “mistaken” zoom-ins and handheld camera jerks and the way they were used made some scenes very immersive.

The music is great, I love the Halloween franchise's signature music.

i really wanted to enjoy this film, but i was left with a sour taste in my mouth. i remember leaving the theater during the 2018 film wanting more, feeling triumphant. But with this one i was glad the film was over and in a way i didn’t care about what happened at the end - and it was a very good ending. Nevertheless, I will watched Halloween Ends which I hope fixes the mistakes that Halloween Kills made and brings a proper conclusion to what the Halloween saga has been promising.