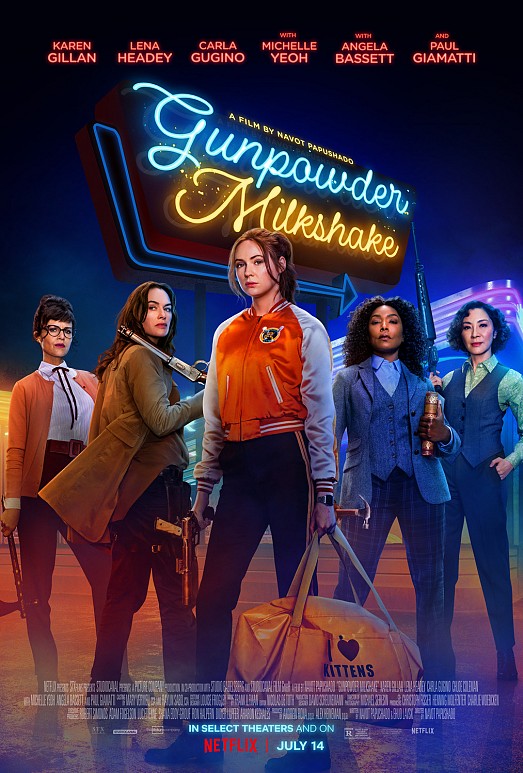 Well no one’s expecting a 7 or an 8/10 movie; it’s a very straightforward flick. An assassin kills the wrong mafia boss’ son and things go south with an 8 year old thrown into the mix. If you think it’s a familiar plot then you’re not wrong. With similar beats to John Wick, Gunpowder Milkshake sets a quirky identity for itself and flies with it... but not too far.

Gunpowder Milkshake (I love the title, by the way) was entertaining throughout its runtime carried by a fast pacing of actions and plot development. My only issue was that after 30 minutes, the film becomes kind of predictable. However, it never lacked the energy that keeps you interested. So, on one hand you will feel like you know what’s happening next and on the other hand it doesn’t ruin the experience.

Karen Gillan gives a good performance as a confused human anime character (with a narrow emotional range) and carries the film alongside  Chloe Coleman as Emily and the rest of the cast which were terrific-ish – their behavior was over the top sometimes. The antagonists were well, antagonists. Their motives and personalities were those of corporate folk... money, and their dominance was expressed through being emotionless men.

The relationships between the characters were fun. Sam and Emily, and Sam and “spoilers”. Also, the ensemble cast worked well together and their personalities brought in a certain cartoonish quirkiness that fit the mood of the film.

No one’s watching this film for the performances, of course. The main point is the action which was decent. We’ve seen better choreographed, shot., and edited fight scenes but what makes these scenes special – or different – is the exotic nature of these scenes and their locations. There’s one fight at some point in the film which had a hilarious, quirky, and absurd nature to it and I loved what it brought. Other fight scenes were really cool and reminiscent of other action flicks. Still, there was some level of creativity put into these scenes and it’s those moments that did not include guns but other gadgets and fighting weapons that shined.
The major issue with the fight scenes is the excessive goriness. The CGI blood spatters were nothing but a pornographic showcase of violence that took me out of the action: they looked too fake and forced, and the same blood spatters were re-used over and over again. Some movieogoers expect this kind of violence, people love violence, and to quote Tarantino when he responded about the graphic nature of his films “Because it’s fun”... and gory violence is always in demand.
And at the end there’s a very cool slow-motion long take which was pretty impressive and really enjoyable to watch.

I should give a thumbs up for the production design (1950s aesthetic) and the music, and a thumbs down to the VFX work which was bad.

The plot isn’t the most revolutionary. The entire “Assassin kills a close person to a mafia boss and has to deal with the consequences” is starting to feel like a genre of its own with every film bringing something new to it: Gunpowder Milkshake introduced kickass all-female protagonists who were phenomenal together as I mentioned (although in a cartoonish way sometimes) + a creative fight scenes variable. I really wish the director had adopted a visual style similar to Scott Pilgrim vs The World which would’ve made the film bonkers (and match the energy it was trying to convey). The script wasn’t the strongest and some line were cringy, especially one recurring joke.

Overall, Gunpowder Milkshake is an entertaining flick that isn’t as over the top as a Fast and Furious movie or as lifeless as a hardboiled action flick; it’s colorful, fun, and harmless 1h 50 minutes of entertainment. *Harmless to the audience and not to the characters inside the film because the amount of people killed is craaaaaaazy.
+I would watch a sequel if they ever did one.

If you loved this film or you are into this kind of films, I highly suggest watching “Nobody”.