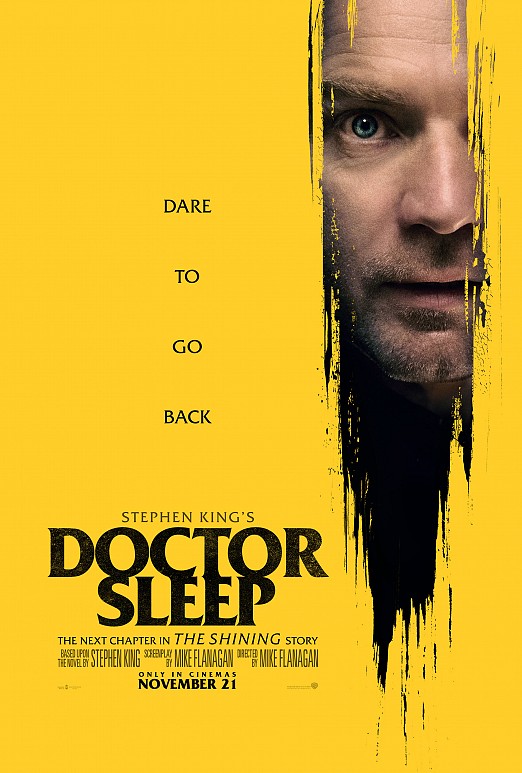 Doctor Sleep shines as an amazing sequel full of terror, emotions, and honor for The Shining - 9/10

I’m going to say it immediately; Doctor Sleep is one of the best films I’ve seen this year and maybe the best.

The star of this show is writer, director and Editor Mike Flanagan. The screenplay was really good. Since I’ve read the book I will go over this part now: unlike many adaptations, this one gets the spirit of Stephen King’s writing: horror, terror, gore, emotions, and humanity. There are many changes, the main one is following Kubrick’s adaptation which largely diverges from the novel (The Shining) hence changing many locations and events from Doctor Sleep. Personally, I wasn’t annoyed by that change. And there are other ones that I won’t talk about except for one which did piss me off but from a certain angle is poetic. Flanagan borrowed many elements from The Shining novel which was a nice nod for book lovers. Doctor Sleep’s plot is very different from The Shining’s yet it heavily relies on elements established in the 1980 classic – Doctor Sleep is best enjoyed after viewing The Shining. The plot follows Danny Torrance, now grown up, into his life post-The Shining as a young girl, Abra Stone, discovers the True Knot, a band of immortal beings who feed on kids with The Shine. It is a different plot and a whole different story which I personally loved and found refreshing. The film’s runtime is 2 hours and 31 minutes, and it can be really felt. The film is long and slow paced but does it bore? No! I was completely sucked into the film after the first act which was slightly trippy.
When it comes to the characters, Dan Torrance has a great arc. He was portrayed by Ewan McGregor which did a good job. Kyliegh Curran was the star of the show. She did a very accurate performance of Abra from the book and her overall acting was solid and she did truly Shine. Rebecca Ferguson as Rose The Hat was terrifying. Carl Lumbly wasn’t good enough as Dick Hallorann nor Roger Dale Floyd as Young Danny. However, Alexandra Essoe did accurately capture Shelley Duvall’s performance as Wendy Torrance. And Emily Alyn Lind as Snakebite Andi was a pleasure to be seen on screen. The remaining cast members did a great job.

The production design was fascinating. The recreation of The Overlook Hotel was (creepily) nostalgic. The cinematography was captivating. The Visual Effects were really well-done. The score by The Newton Brothers was breathtaking and really put Wendy Carlos’ score for The Shining into great use which gave the film a deep and scary atmosphere.

Mike Flanagan fascinatingly directed the film. The shots he took, the angles he chose and the scene were mesmerizing. There were many scenes from the book that can be deemed hard to film, yet he executed them in a clear way. In fact, the atmosphere he created resembled Kubrick’s. Even though he replicated Kubrick in many places (editing and directing), he still did make the film his own: very different, unique and stunning. There were many jump scares but they were the same type that Kubrick used in The Shining. He even replicated scenes from The Shining with different characters, which was a delight. In addition, the scenes recreated from The Shining were also well-done and I hoped there was more. Mike Flanagan also edited the film. The editing had nods to the 1980 classic, and was masterfully done. We have a true horror film that knows how to scare and deeply disturb.

As a horror film, it is scary. It rarely relies on jump-scares and the scary parts are in the unfolding events, music, and directing. What surprised me most and I loved, was emotion. This film almost made me cry at a few points and it doesn’t feel empty. It is fueled by feelings and emotions.

Doctor Sleep really honors Stanley Kubrick’s The Shining and adds humanity to it. It pays The Shining homage and continues the story. The sequel was unnecessary, yes. But was it bad? Absolutely not. I am glad it did not interfere with the mystery left in The Shining’s ending and avoided explaining it.

In the end, this may be the longest review I’ve ever written, but that’s because I loved Doctor Sleep. It was everything I hoped it would be. At a few scenes I was close to crying, others i was smiling because of references to The Shining.

I hope you enjoy it, and shine on dear moviegoer.