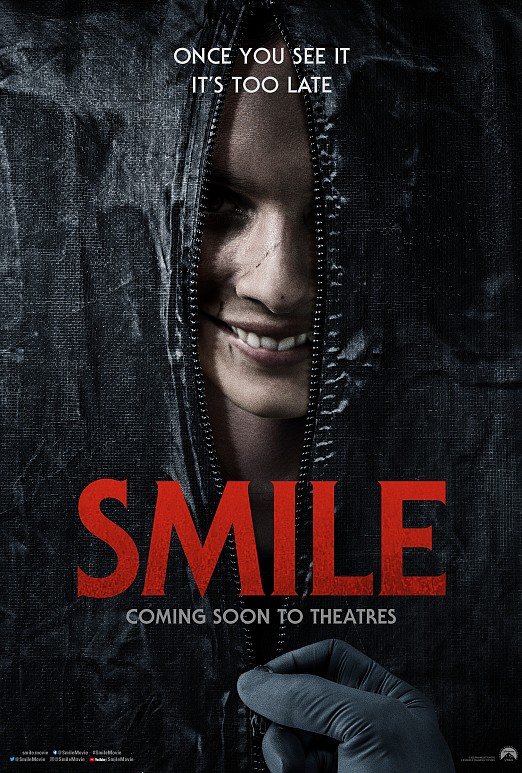 SMILE was a pleasently good time - and with pleasently I meant scary.
Smile started out really good, in fact it’s excellent for about 50% of the runtime. I have to stress on how effectively scary Smile was as it’s been a while since i’ve seen a film with this much tension and functioning scares carried by great direction, cinematography, and performances. From haunting camera movements, spooky blocking, a gripping atmosphere, well-calculated jumpscares, and a sense of discomfort, my heart was pumping for 50 minutes straight. Then, the remaining hour or so were dragging or less effective.

The story is an amalgam of The Ring and It Follows and it shares a lot of similar beats, although it did some stuff better than the aforementioned films. The finale had some haunting visuals that were top-notch. The sound design and score were stellar and really elevated the mood. The gore and special effects were a treat and well-executed. Not to repeat myself, but the first 50 minutes were the good stuff, a horror fan's dream when it comes to good scares.

It can be easily identified where the film failed in my opinion, and it’s because it dragged in a detective plot and exposition to tell its story in order to logically reach the climax. What happened is an inconsistency of the “threat” that only seemed to appear whenever the filmmakers need it and downgraded it from an unpredictable scary force into a disposable plot device as the film was going along. When the first hour was unpredictable and tense with a constant sense of impending doom, the film was not significantly advancing plot-wise and just circled in scary sequences which i didn’t mind as they worked into developing the main character. The second half dragged for a while to make way for exposition and explaining what’s going on with a bizarre, occasional absence of the threat and this is my biggest gripe with this film - and it did not need to explain it this much because it was predictable (how and why the threat thrives and functions, which the film took its time in exploring). I have to mention that some intentionally "disturbing moments" were really funny for me and took me out of the film - yet, provided a good entertaining factor. And some performances were not convincing.

The film could’ve been shortened to 90 minutes and condensed into a more tense and intense film that would’ve been one of the year’s best - it’s the scariest film of the year so far I think, but not the best horror film (it’s either MEN or Crimes of the Future which aren’t really horror but they’re considered so and I loved both of them).

Overall, Smile is a nice spooky film that is a guaranteed fun time especially for friend groups.