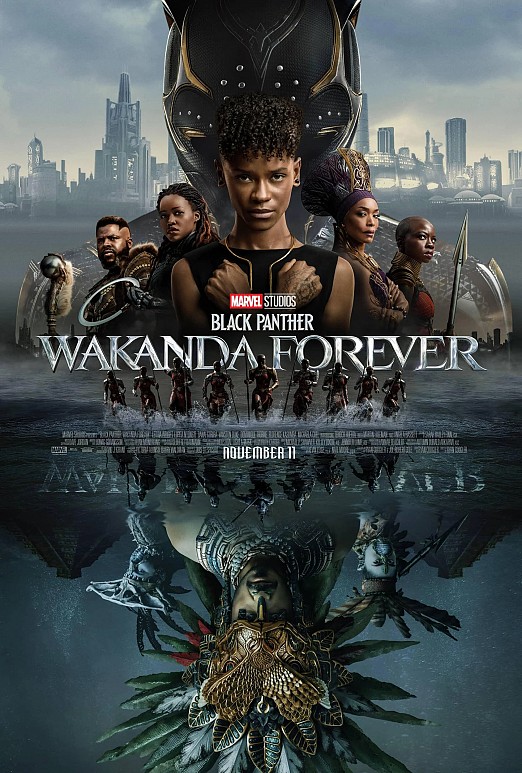 A surprise to be sure, but a welcome one (considering the degrading state of the MCU) - 6.5/10

After Chadwick Boseman's passing in 2020, the future of his iconic character, the Black Panther, became in jeopardy: will Marvel recast? Will they deepfake? Will he be killed in canon? Who is the new black panther? Is there even going to be a new Black Panther?
As everyone knows by now, the character dies in the movie but if you are not caught up to the news, it will feel very abrupt and forced in, as no Marvel character's death was handled this way - all two or three major deaths were given justification and necessity - Tony snapping, Natasha sacrificing herself (and Captain America getting bored and deciding to live in the past causing a million plot holes and continuity issues and Joe Biden's cameo in Endgame). It was sad seeing T'Challa go as his character was ripe and ready to be integral into many stories to come - and the movie does not skimp on giving you two or three moments to mourn in silence (or in tears). Wakanda Forever is tasteful when it came to handle Chadwick's passing. But luckily, the end product was an interesting film – even though it slightly feels like the first act was stitched to an existing script and modified based on the death of Chadwick Boseman.

Black Panther: Wakanda Forever is the movie number 30 in the ever-growing and changing (in quality) franchise that no one seems to be getting enough of as Mr. Feige always knows how to bait his dear fans with endless teases and revivals that keep sucking you in for more. Compared to the mess of projects we've been getting, Wakanda Forever stands out as one of the good ones. I would say it's in the quality tier of Marvel's best - pre-2016.

Wakanda Forever’s strongest suit is the performances. All the cast members delivered excellent performances with Angela Bassett as a stand-out - she commands every scene she is in. Namor and Shuri had incredible chemistry together. Shuri and Riri Williams created a touching parallel to T'Challa and Shuri.

The movie feels fairly fresh in its antagonistic forces but builds itself on a flimsy plot trigger with illogical aspects that prove to be problematic if you think about them – and in a way feel shoved in just to introduce a certain new character for a spin-off series. A few scenes felt staged for shock value instead of logic and timing.
Namor is a good villain, and he is a formidable force who is not really a villain but presented as such - his intelligence and behavior are sometimes compromised for the plot.
The story had beats taken straight out of Multiverse of Madness and the common tropes of Phase 4.
BP:WF tries to balance characters, action, future teases, and honoring Chadwick and does it relatively well. Action sequences, most of the time, held emotional stakes and did not feel like inserts to pass the time or extend it for the fun's sake. The writers worked well on character development and Shuri was put front and center – but there was one choice that was done in a certain scene which shoe-horned a bizarre element just to give her depth instead of working with what they have established. The weirdest aspect of the movie is the inclusion of a side plot that could've been easily written out but as we all know it's part of the glorious plan of the MCU's future.

The story deals with grief and it develops it better than other Marvel projects. Wakanda Forever has a very sincere and serious tone with occasional, passable attempts at humor from a side character (Riri Williams, who has a bright future).

On the technical side of things, Ryan Coogler is one of the best directors that worked with Marvel and he deserves to handle more projects. The cinematography was great, though I have to mention how many scenes were poorly lit. I was alarmed by some editing choices during fight scenes, and the excessive use of dissolve transition was distracting. Green screens were not as obvious as other Marvel movies and it was obvious that a lot of effort was put into this one from all production sides as opposed to the sloppy Thor: Love and Thunder, for example. The music by Ludwig Göransson added a lot to the movie and really elevated some sequences.

Overall, Black Panther: Wakanda Forever is surprsing improvement from the degrading quality of the MCU. It was enjoyable and rewarding.