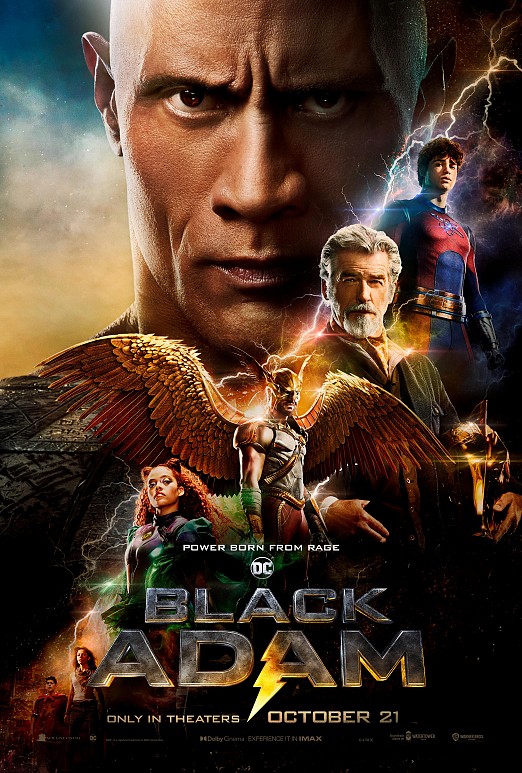 Another generic reproduction of a tired genre - 3.5/10

DC has lost its way. Ever since they cut 30 minutes from Batman v Superman back in 2016, their films have been getting worse, except for a few films. Now after this year’s outstanding The Batman, DC released their next film which is part of the DECU continuity that started with Man of Steel (Joker and The Batman are not part of it) and Black Adam was far, far from decent.

Not sure where to start, but the film is bad from beginning to end. The story is as generic as superhero stories get. It starts with a prologue that rips off its visual style from 300 and gives you an exposition dump that doesn’t make a lot of sense because of reasons that will be explained later. And this prologue should’ve been the film*, instead of using its meddled story for reveals later in the film for “shock-value”. If the screenwriters blended the backstory with the present time in a parallel structure, it would've made the story more compelling - an echo between past and present which was the intention but they used it to push the plot forward when it stumbled instead of making it organic to the narrative and character development as it goes forward. The film brushes over the human characters until it gets to the action, and their presence in the film becomes irritable which was not the intention since they play a huge role in Black Adam's development. The film doesn’t hold back on the action, at all. In fact, it’s pretty brutal for PG-13 which is a good thing - Black Adam knows how to kill with style. Then the debate about whether Teth “Black” Adam is a hero or not - and what type of hero/champion/savior he is - goes around in circles with fight sequences for the next 80 minutes followed by a generic fight against a villain that comes out of nowhere (but you know he is coming, 10 minutes into the film), and roll credits. This film isn’t older than 2012, maybe 2013, to be generous. Every aspect of Black Adam is seen before, and not in a good way. The film felt constructed and written on an evening of mad libs titled “Superhero movie”. The dialogue is even worse and there isn’t a single piece of dialogue that wasn’t questionable (because everything is exposition and spelling events for the audience) - the good side is that it makes the film easy to follow and brainlessly entertaining (if you find it entertaining, that is). And not to forget the plot holes and illogical decisions - but that's spoiler territory which I will avoid.

Dwayne Johnson as Black Adam is a flat character. No personality, no presence. With a backstory and arc that barely work due to how underdeveloped he is regardless of the attempts to give him something that resembles an emotional story. The human characters were there, with the usual annoying child on a skateboard with ideas bigger than him and an obsession with superheroes, and a mother who loves him and will do anything for him. Everyone’s personality is as complex as a maze on the back of a children’s cereal box. The Justice Society of America was a nice addition albeit underdeveloped. You have Hawkman, a highlight for me, whose personality doesn’t go beyond dogmatism and shouting. Doctor Fate is a pragmatic and wise old person. Cyclone is a super smart young adult (who doesn’t act her suggested intelligence). And finally, Atom Smasher who is a dumb jock. That’s as "complex" as they get. I loved Cyclone’s powers and the visual effects that represent them. Doctor Fate needs a solo film, and Hawkman too. I had more fun with the Justice Society than I did with Black Adam: the team upstaged him. The villain doesn’t deserve mentioning because he is very marginal but looking back at him, there was potential to make him better and more compelling if the film followed a different structure (mentioned above).

The film is visually mediocre with blatant attempts at recreating the visual style of Zack Snyder (for some reason): from the slow-motion shots to the use of music (which did not work here), to the CGI style, to even using the same shots from Man of Steel. Now the borrowing from Snyder may have been done to unify the language of the DCEU but with Snyder out of the picture and his plans getting scraped… it’s very cheap of the filmmakers. The action sequences are okay and brutal. There isn’t a stretch of 4 minutes without action which should keep you entertained (I was not). It’s brutal action going on and on and on, which may be enjoyable to some people - but with a questionable plot behind it.

The musical score was annoying and rarely fit the film, with very obvious borrowing from Junkie XL’s Justice League theme. The CGI was decent. DC’s CG, when bad, still looks stylized and is well incorporated into the film - it’s something I have noticed in many of their films.

I appreciated the film’s core political theme and it does make good points about imperialism and third-world counties. I wish they went even deeper into it because it was central to the film and it secretly made a great point about this type of issue. But of course, being a comic book film, why would it even try to develop these ideas?

As you can see, Black Adam is a failure on all sides. It has uninspired visuals and style that badly try to rip off established works, an uninteresting lead, generic side characters, dumb writing decisions for “drama”, and weak thematic development. The only good thing is the post-credits scene which made me smile but the use of a certain musical queue during it has me questioning a certain character's future.

Should you watch this film? Yes, give it a shot, if you like Dwayne Johnson because all of his films feel the same regardless of the IP.