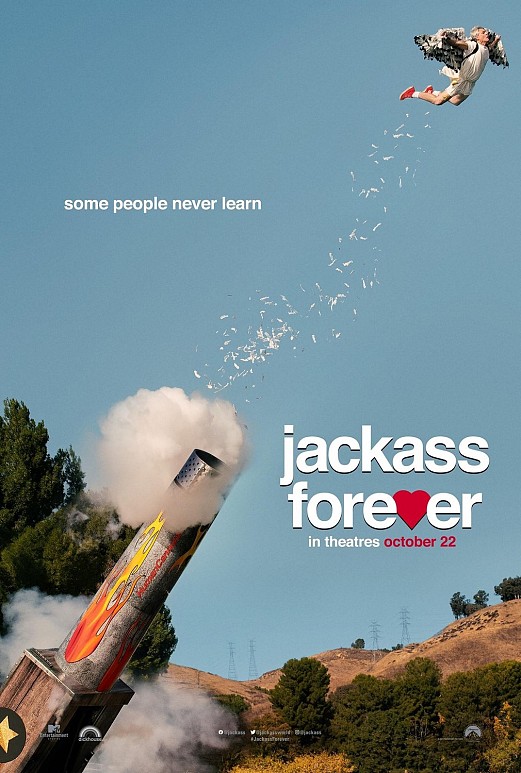 I'm glad this film wasn't released in Lebanese theaters because the censorship committee would've done a good number on it - going from Jackass Forever to Jack Forever (excuse the horrible joke).

Jackass films aren't for everyone: from blood, to vomit, to body harm, to genitals... they're not very appetizing. But, if you loved the first film, you'll love Jackass, forever.

No franchise has maintained a constant quality delivery like Jackass has for the past 22 years, and Jackass Forever is in no way a step back, even though some stunts are a repetition of older ones (but don't worry, they have been revamped).

Seeing the whole cast back together, old and greying, was very nostalgic. They have gotten really old but their energy remains as vibrant and as hilarious as it always has been. Johnny Knoxville, Steve-O, Chris Pontius, Wee Man and the rest are the heart of Jackass: laughing together and attempting genius (and dangerous) stunts. The cast displays the ultimate brotherly and bonding experience. RIP Ryan Dunn, your absence was really felt - the toy car in the rectum x-ray stunt is still peak Jackass.

Like all Jackass films, Forever has a hilarious opening scene which I will refrain from describing - but I'll just say it is inspired by Godzilla. Despite their old age, the cast still pulls off some crazy stunts and attempt dangerous ones targeted at the fresh (new) members who get really exploited - imagine a workplace full of senior workers and managements brings in young workers, the bullying that the younger workers would endure is exactly the enrgy that Jackass Forever portrays. There were some very fun and refreshing stunts that show how much creativity the cast still has. Now they could've cut two or three stunts because the runtime felt a little too long considering the Jackass structure and formula.

In the end, Jackass Forever is a great final(?) installment in the franchise that honors the other films, builds upon their legacy, introduces new blood, and features some of the craziest stunts ever attempted by Knoxville and co.

*Jackass 4.5 has been announced, and I am really looking forward to it.