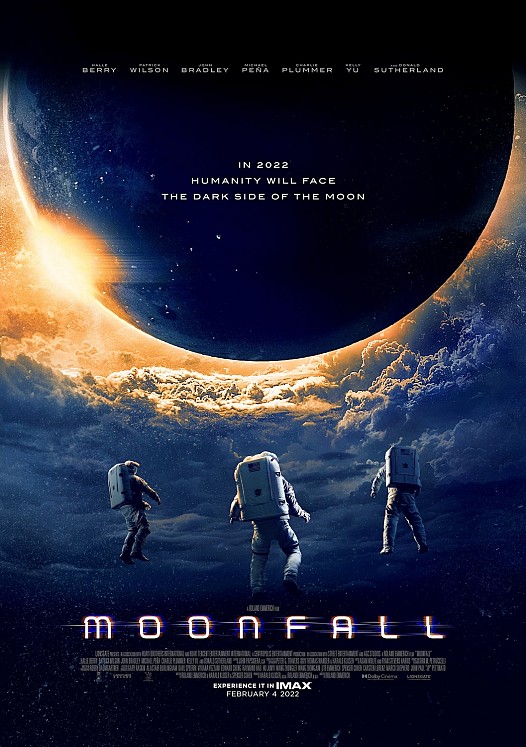 A beautiful and disastrous tragic mess. - 2/10

No one takes the cosncious decision of watching a Roland Emmerich disaster movie and expects it to be good. Just by reading the synopsis, one can approximate how bonkers Moonfall film will be. The moon is crashing with the earth because of aliens… yeah, bonkers indeed. And being a lover of terrible disaster films, I had to watch Moonfall. And lo and behold it was just as I expected it to be with far less “disastering” and more terrible dialogue, embarrassing screenwriting, and a kink for conspiracy theories.

I watched Moonfall back in February and refrained from reviewing it, seeing that its quality is self-evident in the promotional material but I decided to rewrite my Letterboxd review into a more “formal” one.

The movie plays out like a generic disaster film: introducing the threat, getting to know the characters, a main character finds it out, the government ignores the threat, more ignoring and convincing, they jump into action, disaster news footage, etc. bringing no originality to a tired genre which makes you question watching this film as characters make the worst decisions.

The minimal effort that went into the screenplay was very evident. From terrible lines like “what would Elon do?” to “I love Elon” I was laughing like a madman. Moonfall probably has some of the worst obstacles in a film and the way these obstacles and the reaction to them are forced to take the story in the needed direction made the writing appear even weaker. Not to mention dumb and questionable character decisions that serve the plot and not the characters (who are as 2-dimensional as 2 dimensions). But again, it’s a disaster film we want to see some destruction!

And the destruction was weirdly lacking. We just spend so much time with bland characters that we don’t care about - but John Bradley steals the show. The destruction we get is minimal but well-made. And this is where I found pleasure in Moonfall: the disaster scenes. The visual effects work that went into Moonfall was quite remarkable. The tsunamis sweeping skylines, to the moon’s closeness to Earth, were all beautiful to look at. My biggest respect to the VFX team. Sadly, there aren’t enough of these scenes to counter the terrible story that puts so much effort into characters and their "arcs" - I know you need good characters but the film went too far adressing them. Now the most surprising part was a 2-minute sequence in the third act that felt pulled right from a history channel conspiracy documentary but with very expensive visual effects, and I love this stuff. The whole sequence made me feel less bad about wasting 2 hours of my life on this movie. Also, the research and attention to detail in that sequence were beautiful.

The film’s editing was atrocious and really impacted the digestion of this moon-sized disaster. If they chopped a few more scenes from it, it would’ve been more enjoyable. No one expects a tight-locked disaster film but at least make it more watchable. Still, in this mess, enjoyment can be found. I won free ticket so I do not have many regrets regarding Moonfall.

In conclusion, there isn’t a conclusion. The trailer was more fun and absorbing than the film but if you want a brainless disaster movie where the moon comes in for a romantic make-out session with the Earth as humans try to stop it, give Moonfall a shot.