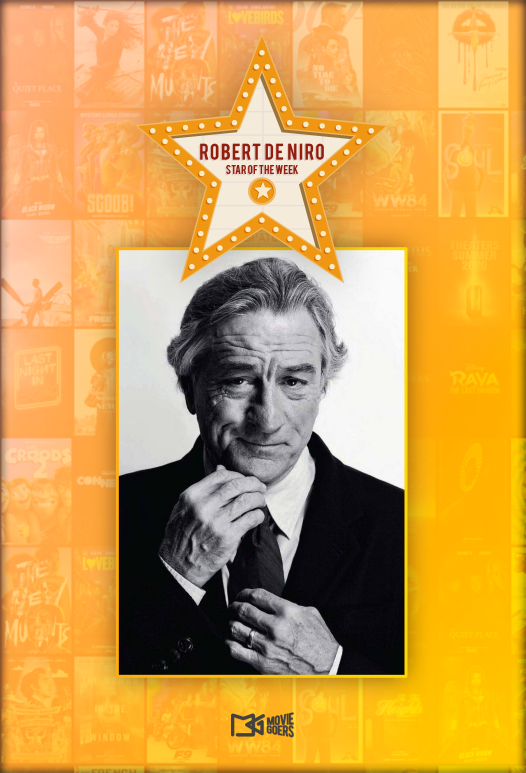 Hey Moviegoers, this is our third Blog post related to "Moviegoers' Star of the Week". We'll be posting every Monday, randomly, about 1 of the 50 most famous Hollywood Stars and share with you his/her TOP 7 Movies of all time.

This week, Moviegoers' Star was born in Manhattan, New York City, on August 17 1943. He was trained at the Stella Adler Conservatory and the American Workshop. His role in Bang the Drum Slowly (1973) helped him gaining fame, but his first film with director Martin Scorsese in Mean Streets (1973) made his reputation as a volatile actor. He's a winner of 2 Academy Awards, first as Best Actor in a Supporting Role for The Godfather: Part II (1974) and the second as Best Actor in a Leading Role for Raging Bull (1980), not to metion his Nominations and Winings at the Golden Globes, Emmy Awards, BAFTA Awards, AARP Movies for Grownups Awards, Gold Derby Awards and many other awards.

He's one of the greatest actors of all time. Robert De Niro!
De Niro had 63 Wins and 134 nominations, starred in over 120 movies and TV series and produced 36 titles.

Here's his TOP 7 movies of all time:

1- Raging Bull - 1980:
When Jake LaMotta steps into a boxing ring and obliterates his opponent, he's a prizefighter. But when he treats his family and friends the same way, he's a ticking time bomb, ready to go off at any moment. Though LaMotta wants his family's love, something always seems to come between them. Perhaps it's his violent bouts of paranoia and jealousy. This kind of rage helped make him a champ, but in real life, he winds up in the ring alone.
Available on Amazon Prime Video, Click Here to watch.

2- Goodfellas - 1990:
The story of Irish-Italian American, Henry Hill, and how he lives day-to-day life as a member of the Mafia. Based on a true story, the plot revolves around Henry and his two unstable friends Jimmy and Tommy as they gradually climb the ladder from petty crime to violent murders.
Available on Amazon Prime Video, Click Here to watch.

3- Taxi Driver - 1976:
A mentally unstable veteran works as a nighttime taxi driver in New York City, where the perceived decadence and sleaze fuels his urge for violent action by attempting to liberate a presidential campaign worker and an underage prostitute.
Available on Amazon Prime Video, Click Here to watch.

4- The Deer Hunter - 1978:
An in-depth examination of the ways in which the U.S. Vietnam War impacts and disrupts the lives of people in a small industrial town in Pennsylvania.
Available on Amazon Prime Video, Click Here to watch.

5- Casino - 1995:
A tale of greed, deception, money, power, and murder occur between two best friends: a mafia enforcer and a casino executive, compete against each other over a gambling empire, and over a fast living and fast loving socialite.
Available on Amazon Prime Video, Click Here to watch.

6- The King of Comedy - 1982:
Rupert Pupkin is a passionate yet unsuccessful comic who craves nothing more than to be in the spotlight and to achieve this, he stalks and kidnaps his idol to take the spotlight for himself.
Available on Amazon Prime Video, Click Here to watch.

7- Men of Honor - 2000:
The story ultimately revolves around two "men of honor"; their relationship, their individual and joint failures and triumphs. Carl Brashear is determined to be the first African American Navy Diver in a time where racism is rife. Leslie Sunday is his embittered trainer, determined to see him fail. Fate, challenges and circumstances eventually draw these two men together in a tale of turbulence and ultimately triumph.
Available on Amazon Prime Video, Click Here to watch.

De Niro's latest updates:
- Robert De Niro is one of the producers of the Bafta nominated The Irishman.
- Robert de Niro says he would play New York governor Andrew Cuomo in coronavirus movie.