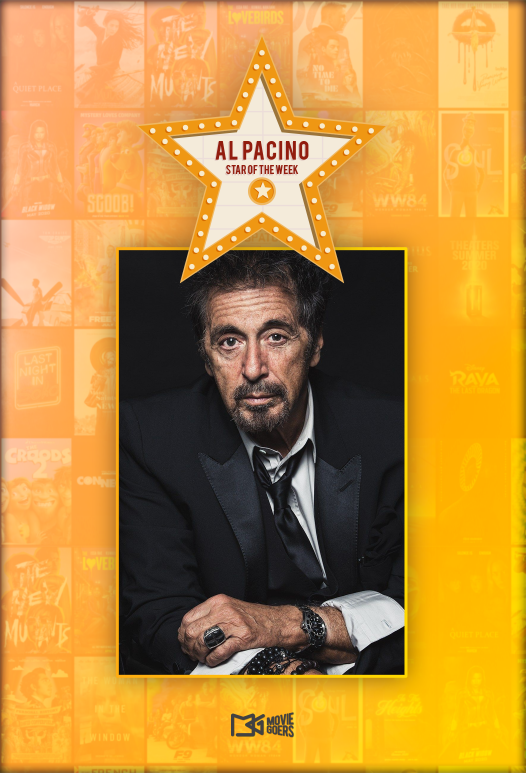 Hey Moviegoers, this is our second Blog post related to "Moviegoers' Star of the Week". We'll be posting every Monday, randomly, about 1 of the 50 most famous Hollywood Stars and share with you his/her TOP 7 Movies of all time.

This week, Moviegoers' Star was born in Manhattan, New York City, on April 25 1940 and was raised in South Bronx after his parents got divorced when he was young. He was always repeating the plots and voices of characters he had seen in the movies and was only interested in school plays at school. He went through a period of depression and poverty while having a full-time career onstage and sometimes he had to borrow bus fare to succeed to auditions. He made it into the prestigious Actors Studio in 1966, studying under Lee Strasberg, creator of the Method Approach. He had his film debut in Me, Natalie (1969) after appearing in a string of plays in supporting roles and winning several awards.

You might have guessed the Hollywood Star by now, if not, it's Al Pacino!

Al Pacino starred in over 60 movies and TV series during his career and was nomiated to the Oscars 8 times and won the "Best Actor in a Leading Role" back in 1993 for "Scent of a Woman". In addition, Al Pacino also got 13 nominations for the Golden Globe and won 5 times.
Here's his TOP 7 movies of all time:

1- The Godfather series - 1972, 1974, 1990:
The Godfather is an American film series that consists of three crime films directed by Francis Ford Coppola inspired by the novel of the same name by Italian American author Mario Puzo. The films follow the trials of the Italian American mafia Corleone family whose patriarch, Vito Corleone, rises to be a major figure in American organized crime. His youngest son, Michael Corleone, becomes his successor.

2- Dog Day Afternoon - 1975:
A man robs a bank to pay for his lover's operation, which turns into a hostage situation and a media circus.

3- Serpico - 1973:
Serpico is a cop in the 1960s-early 1970s. Unlike all his colleagues, he refuses a share of the money that the cops routinely extort from local criminals. Nobody wants to work with Serpico, and he's in constant danger of being placed in life threatening positions by his "partners". Nothing seems to get done even when he goes to the highest of authorities. Despite the dangers he finds himself in, he still refuses to 'go with the flow', in the hope that one day, the truth will be known.

4- The Panic in Needle Park - 1971:
This movie is a stark portrayal of life among a group of heroin addicts who hang out in "Needle Park" in New York City. Played against this setting is a low-key love story between Bobby, a young addict and small-time hustler, and Helen, a homeless girl who finds in her relationship with Bobby the stability she craves. She becomes addicted too, and life goes downhill for them both as their addiction deepens, eventually leading to a series of betrayals. But, in spite of it all, the relationship between Bobby and Helen endures.

5- Carlito’s Way - 1993:
A Puerto Rican ex-con pledges to stay away from his former drug dealing ways but finds himself being dragged back by his past connections and the naive machinations of his lawyer and best friend. Hoping to raise enough money to get away from New York, Carlito Brigante takes on the job of running a nightclub, renews an affair with a dancer but old associates and old instincts suck him back into a world of violence and mistrust.

6-The Irishman - 2019:
Frank "The Irishman" Sheeran is a man with a lot on his mind. The former labor union high official and hitman, learned to kill serving in Italy during the Second World War. He now looks back on his life and the hits that defined his mob career, maintaining connections with the Bufalino crime family. In particular, the part he claims to have played in the disappearance of his life-long friend, Jimmy Hoffa, the former president of the International Brotherhood of Teamsters, who mysteriously vanished in late July 1975 at the age of 62.

7- Scarface - 1983:
Scarface is a 1983 American crime drama film directed by Brian De Palma, written by Oliver Stone, produced by Martin Bregman. It is a remake of the 1932 film and tells the story of Cuban refugee Tony Montana (Al Pacino) who arrives in 1980s Miami with nothing and rises to become a powerful drug lord.