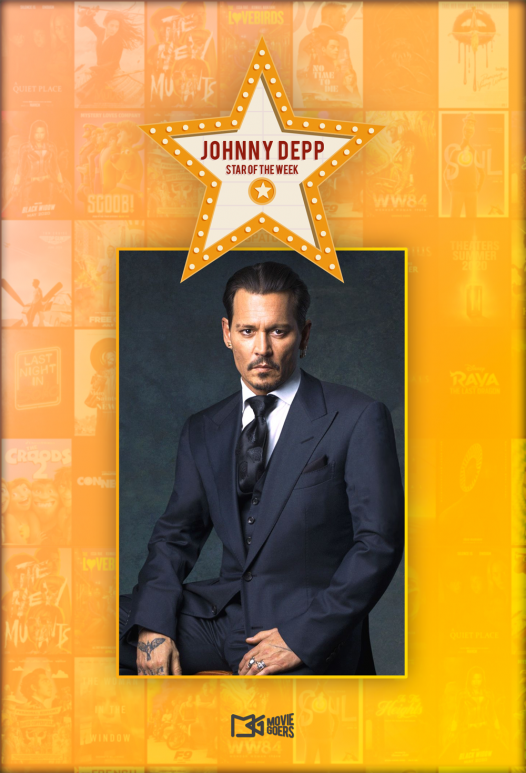 Hey Moviegoers, this is our first Blog post related to "Moviegoers' Star of the Week". We'll be posting every Monday, randomly, about 1 of the 50 most famous Hollywood Stars and share with you his/her TOP 7 Movies of all time.

This week, Moviegoers' Star was born in Owensboro, Kentucky, on June 9 1963 and was raised in Florida. He dropped out of school when he was 15, and fronted a series of music-garage bands, including one named 'The Kids'. He met up with actor Nicolas Cage, who advised him to turn to acting and later his debut was in the low-budget horror film, A Nightmare on Elm Street (1984).

If you didn't guess yet this Hollywood Star, it's JOHNNY DEPP!

Depp has played many characters in his career and starred in many movies, here's his TOP 7 movies of all time:

1- Donnie Brasco - 1997:
An FBI undercover agent infiltrates the mob and finds himself identifying more with the mafia life, at the expense of his regular one.

3- What's Eating Gilbert Grape - 1993:
A young man in a small Midwestern town struggles to care for his mentally-disabled younger brother and morbidly obese mother while attempting to pursue his own happiness.

4- Finding Neverland - 2004:
In 1903, in England, the play writer J.M. Barrie has a complete lack of inspiration, and his last work was a deceptive play. When he meets the children of the widow Sylvia Llewelyn Davies, he becomes friend of the family and Sylvia becomes his muse and her children the source of inspiration. James writes the successful play about "Peter Pan and Neverland".

5- Edward Scissorhands - 1990:
In a castle high on top of a hill lives an inventor's greatest creation - Edward, a near-complete person. The creator died before he could finish Edward's hands; instead, he is left with metal scissors for hands. Since then, he has lived alone, until a kind lady called Peg discovers him and welcomes him into her home. At first, everyone welcomes him into the community, but soon things begin to take a change for the worse.

6- Ed Wood - 1994:
Ambitious but troubled movie director Edward D. Wood Jr. tries his best to fulfill his dreams, despite his lack of talent.

7- Sweeney Todd - 2007:
The infamous story of Benjamin Barker, aka Sweeney Todd, who sets up a barber shop in London which is the basis for a sinister partnership with his fellow tenant, Mrs. Lovett.

Depp's latest updates:
- Johnny Depp confirms he will be back as Grindelwald in Fantastic Beasts 3.
- Disney bosses ‘lobbying for Johnny Depp’s return’ to Pirates of the Caribbean franchise.