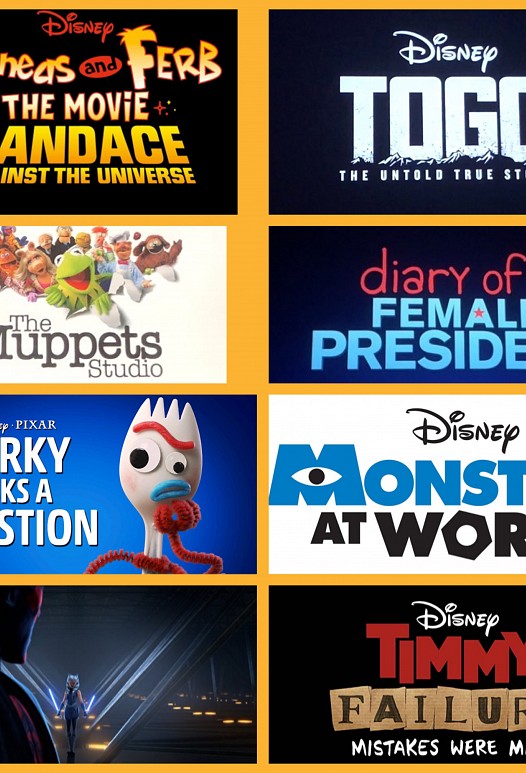 Even More Movies And Series Were Announced For disney+ at D23

Phineas and Ferb the Movie: Candace Against The Universe

The Phineas and Ferb movie will follow Phineas and Ferb as they travel across the galaxy to rescue their sister Candace who has been abducted by aliens and has found utopia in a far-off planet.

Togo is an Untold True Story set in Alaska, starring William Defoe.
It’s the story of the sled dog, Togo, who led the 1925 serum run, but was considered by most to be too small and weak to lead such an intense race.

A short-form unscripted series starring the goofy puppets is set to premiere on the forthcoming Disney+ in 2020.
The series will feature plenty of everyone’s favorite Muppets alongside celebrity guests. “Muppets Now” represents the latest entry to the “Muppets” franchise, which was started by Jim Henson.

Diary of a Female President

Told from the narration of her diary, the series “Diary of a Female President” follows Elena, a Cuban-American 12-year-old girl as she navigates the ups and downs of middle school and begins her journey to become the future president of the USA, starring Gina Rodriguez in the lead role.

Forky, from Disney and Pixar’s Toy Story 4, has important questions about how the world works, such as: What is love? What is time? And the deepest question of all, What is cheese? He explores all of these questions and more in a series of 10 shorts.

The series features Tylor Tuskmon, who is an eager and talented young mechanic on the Monsters, Inc. Facilities Team (MIFT) who dreams of working his way up to the factory Laugh Floor to become a jokester alongside his idols Mike and Sulley.
Starring Ben Feldman as Tyler Tuskman and Aisha Tyler as Tuskman’s mother, will air on Disney+ in 2020.

The series is set before the events of Rogue One, which set up the destruction of the Death Star in the original Star Wars trilogy. It will follow Cassian's adventures as a rebel spy during the formative years of the Rebellion before Luke ever swung a lightstaber.
It was announced back in April that Alan Tudyk would also reprise his role as K-2SO, the former Imperial droid reprogrammed for the rebellion, and that news was confirmed on the D23 stage.
This series will begin filming in 2020.

Timmy Failure: Mistakes Were Made

An 11-year old boy who believes that he is the best detective in town runs the agency Total Failures with his best friend, an imaginary 1,200 pound polar bear.
A first look at the film was revealed at D23.