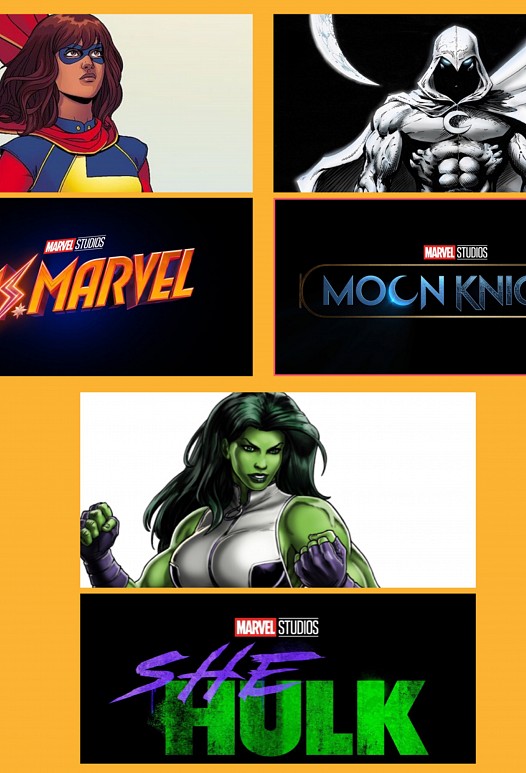 The show will center on Marvel's first Muslim superhero to star in her own comic book title.
Kamela Khan broke ground by becoming Marvel’s first Muslim character to lead her own comics title. Her identity as a Pakistani-American living in a religious family in New Jersey whilst trying to find her own way has been a major focus of the stories. Her powers have been described as polymorphous, meaning she has the ability to stretch and change her shape.
Disney did not announce a release window for the series. Writer Bisha K. Ali (showrunner of Hulu’s 2019 Four Weddings and a Funeral series) is rumored to act as showrunner and write for the show.

Moon Knight, the supernatural, super-powered crime fighter who’s bounced from Avengers to Spider-Man and Hulk books over the years, is coming to Disney+.
Details were scarce: no casting, no plot, no nothing besides being part of the MCU Disney Plus timeline beyond Hawkeye in 2021. But just seeing the logo was enough to send fans in the room into a fit.

Details on the series were scant, other than that it will be the latest of The currently announced MCU Disney+ Series to premiere. In the comics, Jennifer Walters is the cousin of Bruce Banner, given her gamma powers by a life-saving blood transfusion.
Only, for Jennifer, transforming into the She-Hulk doesn’t require losing her mind to rage, she’s just as articulate and in control in her giant green form as she is when she’s small and pink. And she’s also one of the foremost superhero law experts in the Marvel Universe.