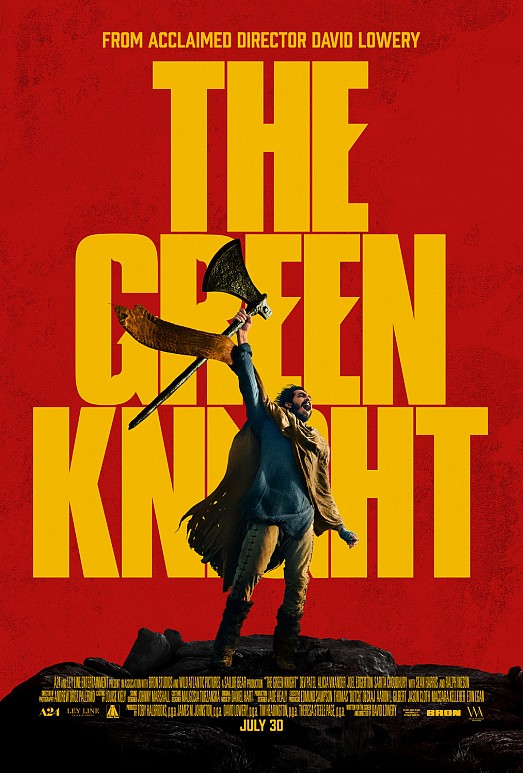 The most exquisite movie of the year and a captivating Arthurian tale! - 8/10

Now rise, Sir Lowery, for your take on the celebrated Arthurian fable of Sir Gawain and the Green Knight is nothing short of a cinematic triumph. Set in medieval times, it stars Dev Patel as a soon-to-be knight who must finish a peculiar game he started with an odd-looking foe. His journey becomes one for the ages, shaped by themes of honesty, courage, manhood, vanity, or kindness, a true exploration of the meaning of knighthood in a literal and figurative way.
While its weakest component has to be a script that could’ve benefited from more depth and less fooling around, this small-scale epic more than makes up for it in its optical department. I’m not exaggerating when I say that it may be the most visually striking film I’ve seen since Denis Villeneuve’s “Blade Runner 2049”. It’s a chef-d'oeuvre and a masterclass in atmosphere building that benefits from an admirable use of colors, lighting, framing, symmetry, and visual effects to capture the events told on screen. It’s a pristine picture, complemented by meticulous work in the sound division that is guaranteed to satisfy all the concerned senses of an audience member.
Other than a few inconveniences here and there that I could’ve done without such as the recycling of actresses that I found to be more distracting than useful or the inclusion of a CGI fox that wasn’t as convincing as the one incorporated in Lars von Trier’s “Antichrist”, I loved what Lowery’s latest project had in store for us. It will most definitely divide audiences and I can imagine many moviegoers leaving the theater disappointed that they didn’t get something that was more in line with the Lord of the Rings movies, but I’ll be rushing to rewatch it the second I get the chance to do so.