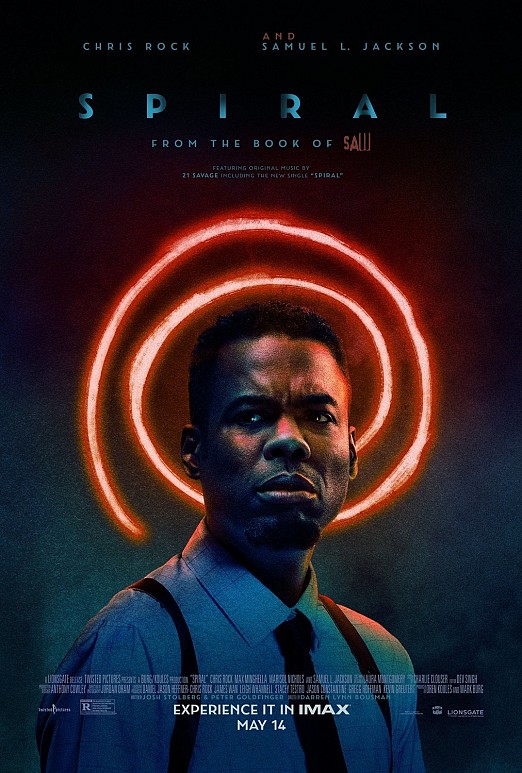 The Saw franchise is spiraling out of control - 3/10

One of the many lessons we’ve learned over the past couple of years is that reforms in the now tainted law enforcement sector need to happen as soon as possible. Chris Rock’s reimagining of the “Saw” franchise, titled “Spiral”, doubles down on that topic and sees a Jigsaw copycat kidnap corrupt members of the police force to put them through brutal traps aimed at setting their records straight. The movie was set to be released in May of 2020, only a few days before the Black Lives Matter protests erupted following George Floyd’s horrific murder at the hands of disgraced policemen, but was ultimately postponed due to the closure of cinemas caused by the COVID-19 pandemic. Had it kept its original release date, I have a suspicion that it would’ve made a lot more noise than it currently is, and not necessarily in a positive way.
By attempting to deliver its social message, “Spiral” invites the audience to root for a psychopathic serial killer who executes his victims in the most gruesome of ways. The only character you feel comfortable supporting is Rock’s Zeke, a detective despised amongst his peers for turning in his crooked partner when he shot an unarmed civilian. Unable to step out of his well-respected father’s shadow, the assignment of this head-spinning case is his chance to finally make a name for himself in the field. His drive to fight for what’s right has caused him to lose everything, which is why I wished that he was given a bit more depth as he came across as a very cliché protagonist.
It’s very clear that “Spiral” borrows the Saw formula to make a much more serious statement than its predecessors. Even if I found its social remarks to be lost in translation, it definitely dials down the torture porn aspect that made the franchise so famous in the first place. You still get a couple of gory traps here and there, but they’re nowhere near as creative as some of the ones we’ve seen in previous installments. Aside from that, the intimidating voice of Tobin Bell was replaced by a much less threatening one that I had a very difficult time taking seriously, and the only other leftovers come down to the bad editing, questionable narrative logic, and a handful of shoved in references. In other words, fans of the franchise likely won’t find what they’re looking for in this particular chapter of the book of Saw.
Despite all its negative, one thing I’ll say about “Spiral” is that I never found myself bored while watching it. Sure, it’s very easy to pick it apart and I do wish that it took itself way less seriously, but the efforts in making the story as engaging as possible did pay off in the long run, even if it’s sometimes for reasons not intended by the team behind it. I’m not entirely sure who to recommend it to, but I can sense that there’s a demographic that will enjoy what this film had to offer regardless of all the flaws that come with it.
MOVIE'S GRADE: 3/10