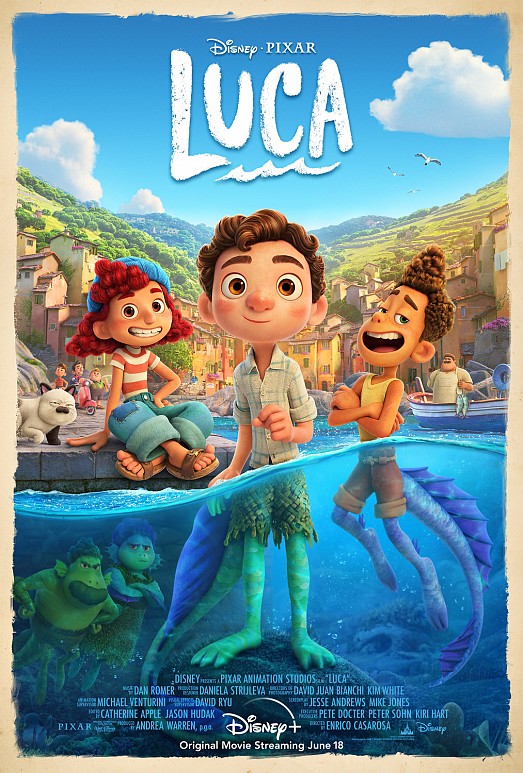 To Pixar’s latest project, I have two words to say: Mamma Mia!
First-time director Enrico Casarosa managed to exceed all my expectations by delivering the feel-good movie of the summer in “Luca”, a half-autobiographical coming-of-age story that takes place in a small Italian village during the 1960s. It follows two young sea monsters, voiced by Jacob Tremblay and Jack Dylan Grazer, in their constant search for adventure away from the depths of the sea. Exposure to air transforms them into human children allowing them to blend in with the city’s residents, all of which have been hunting their kind down for years now as they perceive them as threats.
With its gorgeous landscapes, relaxing music, odes to Italian culture, and subtle romantic undertones, it’s impossible not to draw comparisons between “Luca” and “Call Me by Your Name”. While the former is much more family-friendly than its inspiration, they are both carried by the chemistry of their leads and the tranquil, summery vibes discharged by the atmosphere created. Despite the inclusion of a fantasy factor, “Luca” remains grounded in reality and comes across as the cinematic equivalent of drinking a freezing glass of water on a hot day.
It’s a pleasant watch overall, but one that nevertheless comes with its fair share of annoyances. The irregular Italian accents and inconsistent rules that the narrative sets for its characters were occasionally distracting, however it’s the film’s familiar structure that acts as its biggest liability. The stakes are low, the flow is obvious, and I never felt like it was a necessity for a film that knew how to detach itself from the general Pixar formula in other areas, including its main themes. The ending was also frustrating. It was as if the creative minds behind it ran out of time and inspiration 80 minutes into the movie and were forced to conclude their story abruptly, in a way that will feel rushed at its best and lazy at its worst.
Nonetheless, I had a blast with “Luca” and share the disappointment of most of its crew who were left with a bitter taste in their mouths when it was announced that the film would go straight to Disney +. It’s not quite Pixar at their best, but it’s awfully close to being so.
MOVIE'S GRADE: 7/10