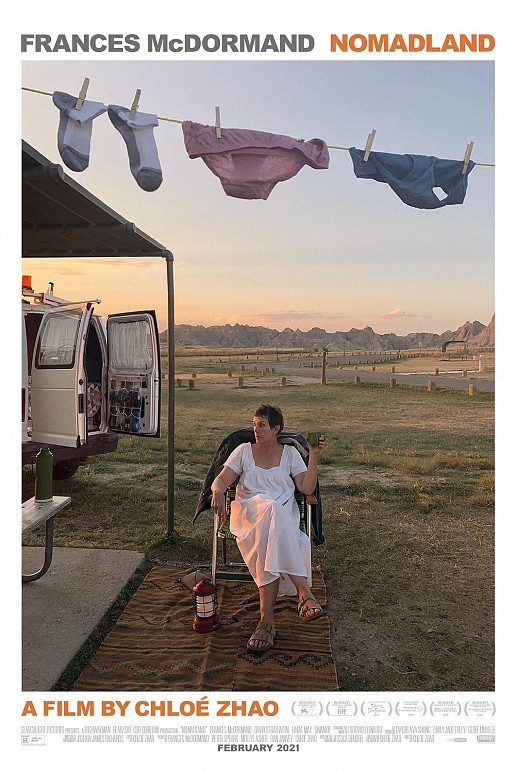 Tattooed on the arm of a co-worker of Frances McDormand’s Fern are lyrics from the song “Home Is a Question Mark” by Morrissey that say: “Home, is it just a word? Or is it something you carry within you?”. This double query sums up perfectly what Chloé Zhao’s third feature “Nomadland” is about. Taking place right after the Great Recession of 2009, it follows a woman as she abandons the capitalistic definition of the term “house”, opting instead to hit the open road in an RV to live her life to the fullest.
Considered by many to be one of the best movies of 2020, I’ll be honest and admit that I had my reservations about the dramatic feature. As much as I respect Zhao as a filmmaker and love watching her talk about the art form, I wasn’t sold on her previous work, released three years ago to worldwide acclaim. I feared that “Nomadland” would leave me as disappointed as “The Rider” and that I wouldn’t be able to connect to it on an emotional level, but I cannot tell you how incredibly happy I was to be proven wrong because I can confirm that the feature earned every positive reaction it generated and more.
I could go on forever talking about how effective the simplistic cinematography and score were in building the film’s atmosphere, but what truly sold the narrative to me was the way it handled its main subject matter. Zhao nails the balance between happiness and sadness, resulting respectively from the freedom found in this newly found lifestyle and the hardships that come with it due to a system that doesn’t encourage it. Every ounce of it can be felt in Frances McDormand’s impeccable performance, but also those of her co-stars, who I later learned to my surprise were all real-life nomads who even shared their real names with their characters’. The result is a raw and honest look at the tyranny of the dollar and the prison it has thrown us in with our consent. We have learned to look down on people who live their lives without a concrete plan like Fern does, while at the same time working tirelessly to pay for a house we know we can’t afford. The beauty of the film is that despite the difficulties encountered by the protagonist, you can’t help but feel a little jealous of her newfound liberty.
If you haven’t checked out “Nomadland” yet, what are you waiting for? It’s a film I can see growing on me and one that most certainly deserves your time. To me, this is the feature that turned Chloé Zhao into a force to be reckoned with, and I cannot wait to see what she does next (which apparently is a big-budget Marvel movie?).
MOVIE'S GRADE: 9/10