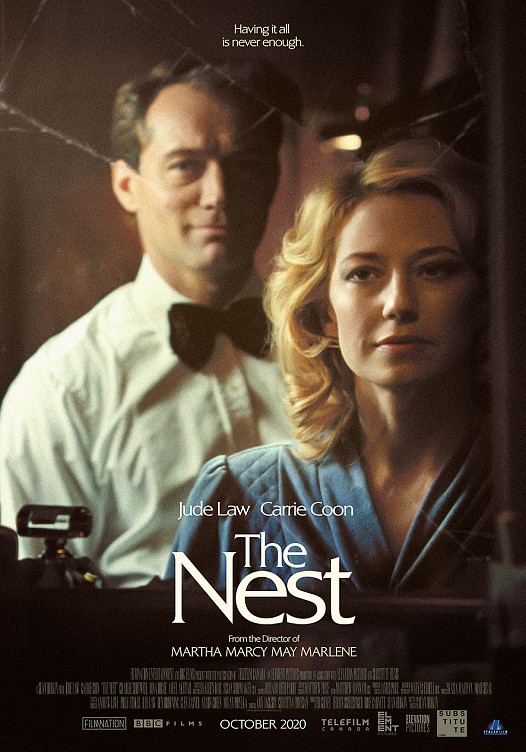 An engrossing look at the destructive nature of consumerism - 8/10

There's no better feeling than watching a movie knowing virtually nothing about it and leaving the theater convinced that you've just watched one of the finest films of the year. With today's easy access to information, it's nearly impossible to keep that sense of mystery alive as buzz generates online way before the release of a movie of which you've probably seen the trailer of a few months prior. But I learned about "The Nest" this week while browsing the coming soon section of my local theater and saw that it starred Jude Law and Carrie Coon, two actors whose work I usually admire. The poster also indicated that it was directed by Sean Durkin, whose underrated debut "Martha Marcy May Marlene" almost a decade ago skyrocketed his name on the "filmmakers to keep an eye on" list. Without looking up anything about it, I was sold.
The plot is pretty simple and straightforward on paper: an entrepreneur and his family leave their lives in New York to live in England where the opportunity of fresh beginnings awaits them. We are first introduced to the glamourous lifestyle of the O'Haras. They seem to have the resources to live countless happy lives and aren't afraid of using them to satisfy their needs. But that facade starts to crumble with the sudden move to their English mansion as the dangers of Jude Law's Rory consumerism start to tear the family apart. Reality hits Carrie Coon's Allison and her children like a train as they become victims of the patriarch's obsession with self-image, and it doesn't take long for them to realize where happiness truly lies. What ensues is a heartbreaking family drama beautifully captured by the technical skills of Sean Durkin, whose framing, lighting, and subtle use of music played a major role in conveying the film's emotions to the audience.
"The Nest", however, is the type of movie that rewards patience, so I'd recommend staying away from it if slow pacing isn't your thing. But for those who aren't afraid of a movie that takes its time to properly develop its themes, I'd strongly recommend seeking it out because aside from a couple of exposition-heavy scenes and a side character's arc that felt a little rushed, I absolutely loved it.
FINAL GRADE: 8/10