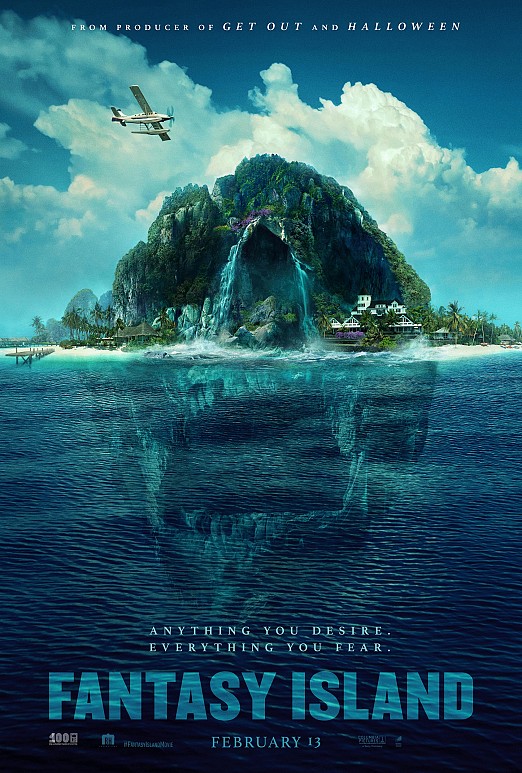 My review will be based solely on this film as a stand-alone feature and not as a reboot of the famous 1978 TV show that holds the same title.

The enigmatic Mr Roarke makes the secret dreams of his lucky guests come true at a luxurious but remote tropical resort, but when the fantasies turn into nightmares, the guests have to solve the island's mystery in order to escape with their lives.

For starters, I can't really say that Blumhouse's Fantasy Island wasn't amusing and entertaining but I also won't deny that it had some serious flaws!

The story, for instance, was like a double-edged sword. On one hand, it's concept was unique, fun and totally intriguing. But on the other hand, it was inconsistent, messy and somehow failed to leave a lasting impact.

You see, the entire film needed an extra dose of everything. The first and last part were on the right track. They contained enough information, details and mystery to keep one interested. But unfortunately failed to go all the way through. The second part, however, was just wrong. It was boring, uninteresting and felt 10x longer than it actually is! Maybe this was due to the multiple plots happening at the same time. In other words, things were bound to get overwhelming at some point.

But, I cant not emphasize on the uniqueness and importance of Fantasy Island's main concept : Fantasies. This film is trying to tell us, in one way or another, our fantasies are bound to come true. Maybe not in the way we picture it. Maybe not as clean and organized as we hope it would. And maybe not as easy as we want it to be. But eventually, they will!!!

Moving on, some of Fantasy Island's characters were meaningful and dynamic. They had a purpose, a meaning and they played a major role in the storytelling process. But, some I'm afraid were just loose ends that needed more study and more development!!

Maggie Q And Portia Doubleday really knew how portray their characters. They brought depth and emotional qualities into their performances and that really showed. Lucy Hale, as much as I like seeing her onscreen , i wasn't totally convinced with her performance. It sometimes felt too forced and fake. Everyone else's performances were below average and underwhelming.

There's actually a lot of material from which the creators and director Wadlow could've drawn inspiration. They could've expanded on the already existing concept and story and create a really deep motion picture that would've made a lasting impact on its viewers. But nevertheless, Fantasy Island is still a really interesting and enjoyable film to watch!