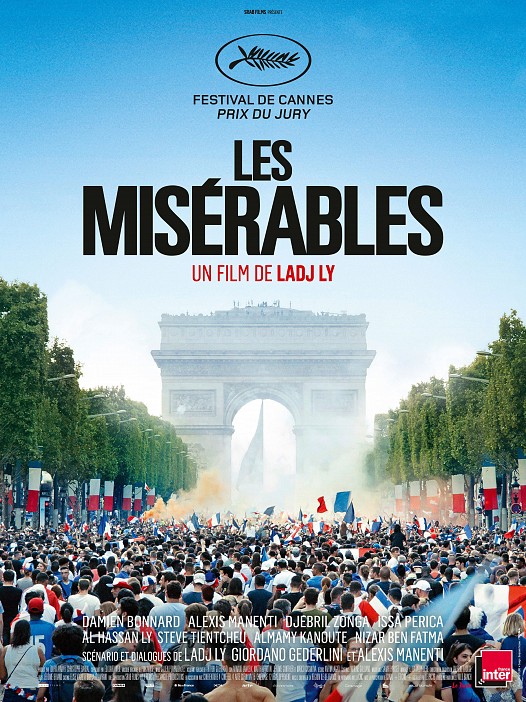 Performances: 8/10
Screenplay: 7/10
Editing: 7/10
Cinematography: 7/10
Verdict: Most depictions of Paris in modern Cinema paint it as this dreamlike, romantic city where only good memories are made. Ladj Ly throws all that out the window and introduces us instead to a much grittier neighborhood in the French capital.
The film begins with a rookie officer joining his new ruthless team to hit the streets of Montfermeil, where he starts discovering a world of violence, poverty, and racial segregation. The first half of the movie heavily reminded me of "Training Day", and I was here for it. I loved the relationship between the main three officers, I loved the depiction of a world unknown to us, and I loved the way Ly emphasized the reigning chaos with equally chaotic camera work. What very much felt like world building at first then turned into a fascinating, albeit at times dependent of questionable conveniences, narrative driven by many relevant and topical themes ranging from police brutality to racism that ultimately led to an exhilarating final act that left me on the edge of my seat. The only real issue I had with it was the fact that I was at all times reminded of other films that tackle identical topics in similar ways. Whether it's "Training Day", "Crash", or "Detroit", another (arguably better) movie was always playing in my head, and that always kept me from being completely immersed in the one I was watching.
"Les Misérables" has nothing to do with Victor Hugo's timeless story, and yet has everything to do with it. I can completely see why the movie won the Jury Prize at Cannes last year and why it was France's submission to this year's Academy Awards. It's a well-made, very relevant movie that is both shocking and fascinating, and I obviously recommend checking it out.
FINAL GRADE: 7/10
ORIGINAL SOURCE