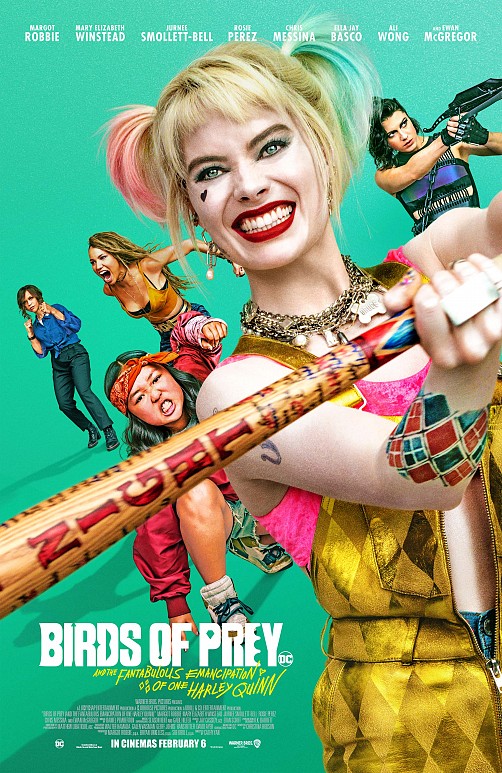 Performances: 6/10
Screenplay: 5/10
Special Effects: 5/10
Costumes/Makeup: 7/10
Editing: 6/10
Cinematography: 5/10
Score/Soundtrack: 7/10
Entertainment Factor: 7/10
Verdict: "Suicide Squad" was a mess. Even hardcore DC fans have a difficult time defending what might be my least favorite comic book adaptation of the past decade. But it was a huge box office success, and one of its few silver linings for a lot of people was Margot Robbie's take on Harley Quinn. So naturally she got her own spin-off, and me not being a big admirer of her portrayal of the iconic character, I wasn't too sure what to expect from it.
But I'm happy to say that I was pleasantly surprised. "Birds of Prey" is far from being perfect, but it can at least pride itself in being entertaining. It's definitely a step in the right direction for DC and Warner Bros., who have been struggling to deliver quality fun comic book films lately ("Suicide Squad" and "Aquaman" are prime examples of that). What made this movie stand out was its chaotic tone which paralleled Quinn's - who serves as the film's narrator - personality. An electric soundtrack, timeline jumps, self-aware comedy, and loads of intentional clichés contributed in shaping the movie's rather unique voice. Ewan McGregor as the main villain was a delight, and Margot Robbie, despite adopting an accent I'll never get used to, did a great job. My issues are mostly related to the other supporting characters, who barely benefit from any sort of development and who almost felt like a liability to the narrative. Every scene featuring any of them never seemed genuine, and that led to a final act that felt was both rushed and tonally out of place. I also didn't find the action scenes to be as entertaining as one would imagine from that sort of blockbuster, and there were a few scenes that were impossible to buy despite the self-aware nature of the movie.
"Birds of Prey" was fun, but it's more than probable that I'll never revisit in my life. I will, however, be checking out any potential sequels, and I will applaud it for at least feeling a little more fresh than the average, one-tone comic book movies we're getting nowadays.
FINAL GRADE: 6/10
ORIGINAL SOURCE