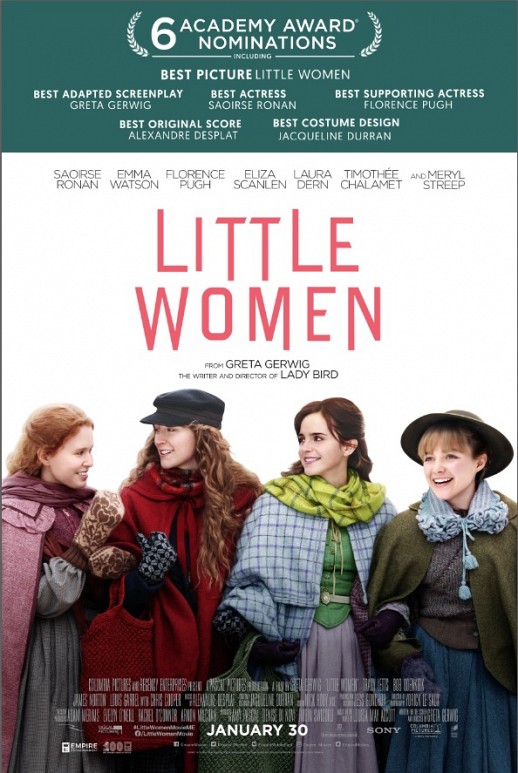 Performances: 9/10
Screenplay: 8/10
Costumes/Makeup: 9/10
Editing: 9/10
Cinematography: 8/10
Score/Soundtrack: 9/10
Verdict: I'm not the biggest fan of period pieces. And while I liked "Lady Bird", which was Greta Gerwig's massively acclaimed directorial debut, I can't say that I loved it. I wasn't sure what to expect from what is the fourth adaptation of a novel I'm not familiar with at all. And to be honest, I'm glad I watched it with next to no expectations, because I ended up absolutely loving every second of it.
"Little Women" may be set in the mid-1800s, but that's hardly what the movie focuses on. It's much more interested in recounting the story of the March sisters, each driven by vastly different dreams and divergent means to achieve them. And it excels at doing so. Gerwig manages to make every single character interesting in their own way. Not one of them felt like a weak link in a story that also can pride itself in being funny, thematic, and of its time. The chemistry between the impressive cast consisting of names such as Saoirse Ronan, Emma Watson, Florence Pugh, Eliza Scanlen Laura Dern, Meryl Streep and Timothée Chalamet was undeniable and their performances was nothing short of extraordinary. The emotional weight of the film was also enhanced by Alexandre Desplat's transcending score, which is easily one of my favorites of 2019. The cinematography also was stellar, especially when it came to play around with colors as a visual way of telling us in which timeline the narrative is happening. Because yes, the story isn't told in a linear fashion, and while I wasn't too sure if I liked that decision at first, Gerwig pulled it off so beautifully that by the end of it I couldn't see it being told in any other way.
Aside from a few nitpicks I had with the film such as some lines of dialogue feeling a little off or non-matching accents between the family members, I believe that this adaptation of "Little Women" is easily one of my favorite period pieces I've seen... maybe ever? It's funny, it's charming, it's classy, it's well-made, and most importantly, it's driven by characters I deeply cared for, and for all these reasons, I consider it one of the very best movies of 2019.
FINAL GRADE: 9/10
ORIGINAL SOURCE