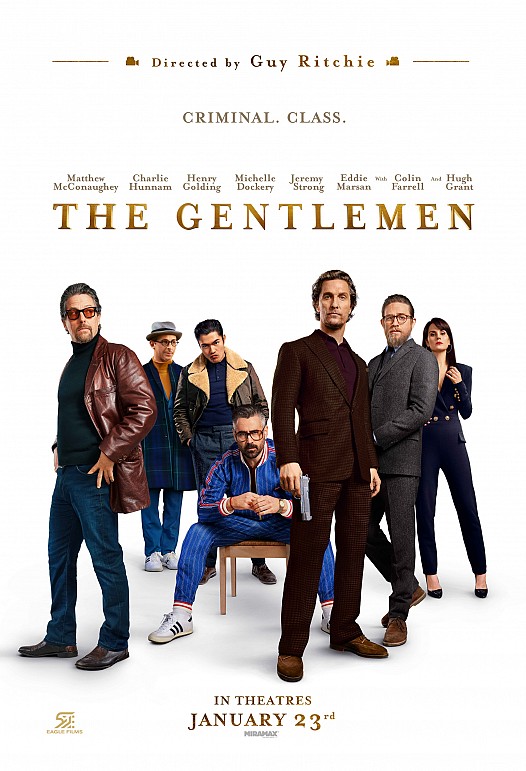 Performances: 8/10
Screenplay: 7/10
Costumes/Makeup: 6/10
Editing: 6/10
Cinematography: 6/10
Score/Soundtrack: 7/10
Entertainment Factor: 8/10
Verdict: Guy Ritchie's had a rough couple of years with the releases of "King Arthur" and more recently "Aladdin". Big budget, studio-backed movies are not his thing, and he learned that the hard way, even if the latter did gather a few fans. With "The Gentlemen", the British director signs a glorious return to what made him such a recognizable name in the first place: Crime thrillers with a touch of dark humor. And boy am I glad he made that decision, because I had a blast with that movie. And that's coming from someone who doesn't really consider himself a fan of his early work.
"The Gentlemen" stars a bunch of well-known names, all of which have incredible chemistry with one another, and follows an American drug lord (played by Matthew McConaughey) looking for a way to cash out his immense business. On the surface, the story doesn't really offer something we haven't seen before, but it's Ritchie's way of telling it that makes it such an entertaining, fast-paced, self-aware and hilarious ride. Ritchie knows that these stories sell easily, and uses that aspect to his advantage by introducing Hugh Grant's character Fletcher, a private investigator having a talk with Charlie Hunnam's Raymond by presenting his discoveries in the form of a screenplay. Ritchie's unique style, while a little all over the place especially in the film's first act, also plays a big role in the comedy's, because that's what I consider this movie to mainly be, entertainment factor. It gave it a different feel than other drug-driven crime thrillers, and while I can see it not working for a few people, it most definitely did for me.
I hope Guy Ritchie stays on the path in which he excels most, because he really does have a unique way of telling stories that in the hands of a different director would completely flop. I'm not exaggerating in the least when I say that "The Gentlemen" is his best work in at least 5 years.
FINAL GRADE: 7/10
ORIGINAL SOURCE