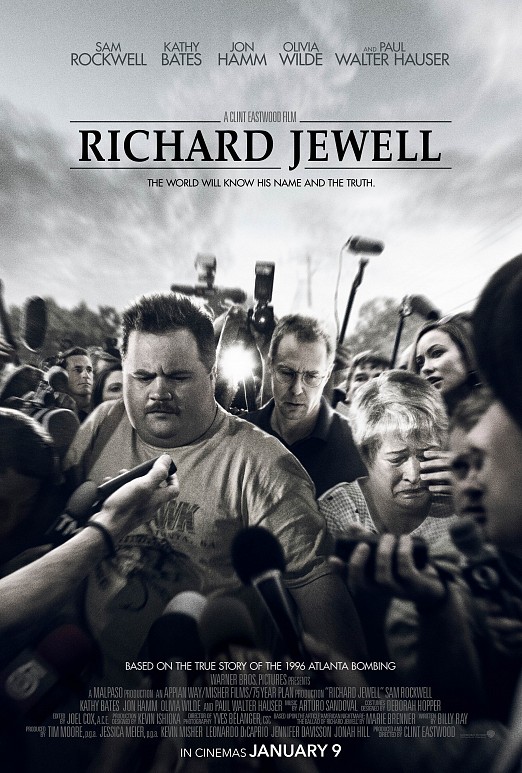 A solid tale of the repercussions of an injustice - 6/10

Performances: 9/10
Screenplay: 6/10
Costumes/Makeup: 6/10
Editing: 5/10
Cinematography: 6/10
Verdict: The world is a dangerous place filled with injustices, and Richard Jewell was the unfortunate victim of one back in 1996. We're at the Olympics in Atlanta, and the American security guard is hailed as a hero when he saves hundreds of lives from a bomb. But his moment of fame quickly turns against him when the FBI names him as the primary suspect of the terrorist act.
Clint Eastwood is a Hollywood legend, there's absolutely no denying that. But his directorial efforts as of lately have been a little rough on the edges. Now I wouldn't exactly call "Richard Jewell" a return to form for the Oscar-winning director, especially since I believe that his direction, along with the safe, clumsy, and cheesy script were the film's weakest elements, but I'd argue that the movie is his best since "Gran Torino", released back in 2008. The reason behind that statement is twofold: One, the story itself is absolutely fascinating and certainly deserves to be told, and two, the performances are nothing short of phenomenal. If we lived in fair and just world, all of Paul Walter Hauser, Sam Rockwell, and Kathy Bates would be front runners for every acting award that exists out there. All three beautifully showcased a wide range of emotions that truly made us care for their characters and feel the abuse they were subjected to. They were by far the best aspect of a film that otherwise doesn't really offer anything worth mentioning on a technical level and that easily could've been at least 20 minutes shorter had it not pointlessly dragged in its first half and introduced a certain storyline I'm not entirely sure deserved that much screen time.
Nevertheless, "Richard Jewell" is definitely worth checking out and I can see it being widely popular among mainstream audiences. It certainly is a step up from last year's "The Mule" and "15:17 to Paris", and is probably my favorite entry in the unofficial "True American Heroes" franchise Eastwood's been building over the past few years.
FINAL GRADE: 6/10
ORIGINAL SOURCE