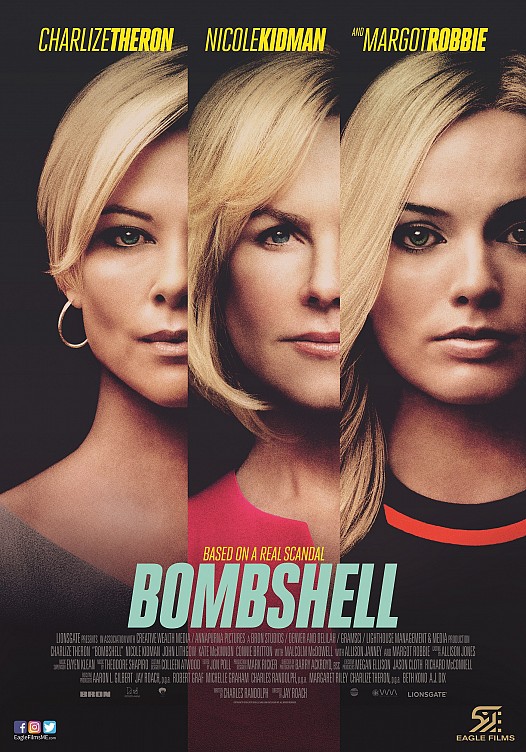 Performances: 9/10
Screenplay: 5/10
Costumes/Makeup: 8/10
Editing: 4/10
Cinematography: 4/10
Score/Soundtrack: 5/10
Verdict: "Bombshell" recounts the story of one of the very first major take-downs of the Me Too movement. In it, a group of women, all employed at Fox News, come forward to denounce the toxic workplace atmosphere they've been subjected to and the horrible things they had to endure. And is it interesting, empowering, and inspiring? Yes to all these things. But is it a good movie overall? I honestly didn't think it was.
Because amazing performances by Theron, Kidman, Robbie, and Lithgow, as well as convincing makeup work aside, the film was kind of a giant mess. It clearly struggled to find its identity and never committed to the stylistic approach it was going for. Lazy narration, cheesy moments, forced characters (Kate McKinnon's for instance), and a second half that dragged a lot came to ruin what I believe is a shocking story that still needs to be consumed by everyone. Jay Roach, who I don't think was the best choice to helm a project such as this one, definitely took his inspirations from Adam McKay's recent political dramas (|Vice", "The Big Short") but never was able to replicate them or add anything notable to them. Instead, the film came off as chaotic, sloppy, and quite frankly at times annoying. But thankfully, the story and performances were here to slightly make up for that.
FINAL GRADE: 6/10
ORIGINAL SOURCE