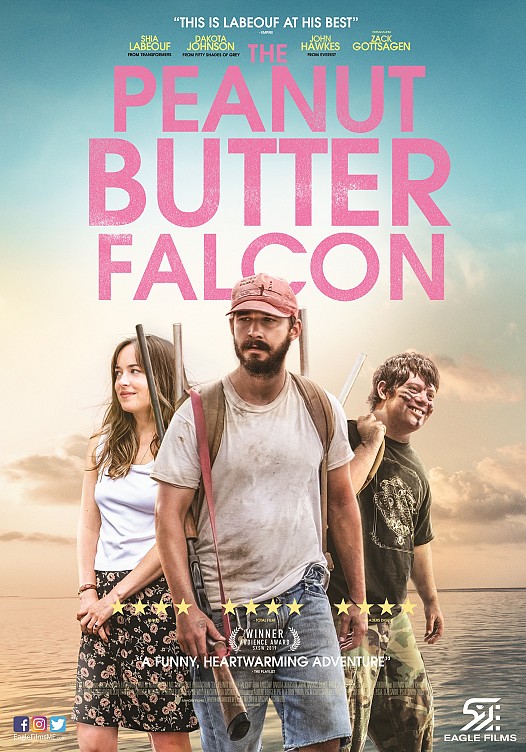 Performances: 4/5
Screenplay: 3/5
Editing: 3/5
Cinematography: 3/5
Score/Soundtrack: 3/5
Entertainment Factor: 4/5
Verdict: Is "The Peanut Butter Falcon" a cinematic masterpiece? No. But is it one of the best feel-good movies of the year? Absolutely, yes.
The film, which is a road-trip adventure led by a runaway 22-year-old with down syndrome and a fisherman he meets on his way to a wrestling school, radiates so much heart that you can't help but keep a smile on your face for its entire runtime despite it not really taking any risks and following a formula we've seen countless times before that does fall into cheese territory at times. It also never quite offers anything new in its technical aspects, mostly in its score and cinematography, but it is held together by its three leads, two of which I believe suffer from the "Robert Pattinson syndrome", meaning that despite having proven themselves more than once on the indie scene, their names are still unfortunately associated with one poorly received big-budget franchise. These two are of course Dakota Johnson, who does a more than decent job in a job that doesn't entirely allow her to shine, and Shia LaBeouf, who's brilliant as Tyler, the fisherman Zack Gottsagen's (who's also great) character stumbles upon.
"The Peanut Butter Falcon" is a film that is impossible to hate. It's in no way revolutionary, but it emits so much heart, energy, and positiveness that it makes the experience of watching it a very pleasant one. So do yourself a favor and check it out as soon as possible!
FINAL GRADE: 7/10
ORIGINAL SOURCE