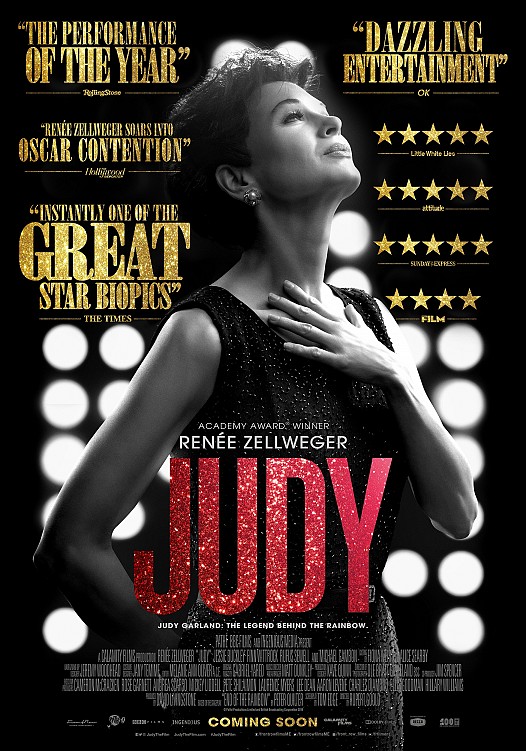 Verdict: Judy Garland is an icon. Her performance as Dorothy Gale in “The Wizard of Oz” is simply magical and eternal, but unfortunately came at a very heavy cost: her childhood. She was turned into a money machine at a very young age, and was denied the simplest joys of life in order to keep generating revenues for people who only saw her as a product.
"Judy", directed by Rupert Goold, focuses on the latter years of her life, in which she finds herself at the an all-time low, and I honestly walked out of it mostly disappointed. The biography never succeeded in keeping me interested in what was happening, and that is mostly due to its extremely cheesy and formulaic script that is way too safe to be absorbent. The scale of it is way too small for Judy's large presence and it ultimately became a chore to keep up with it. Production wise, the film looked like a film made for television, another thing that unfortunately contrasted Judy's colorful and eccentric personality. The only redeemable aspect of the film was Renée Zellweger's performance as the titular character. I don't know if I'd call it one of this year's bests, but she truly stood out in a film that otherwise didn't really offer anything interesting.
I was really rooting for this movie to work, but I just couldn't get into it at all. The two hour runtime felt like an eternity due to the film simply not having a personality. It was the dullest, safest and most cheesy (I cringed at the very final scene) way to tell that particular story, which is a shame considering Judy Garland's status and heartbreaking origins within the industry.