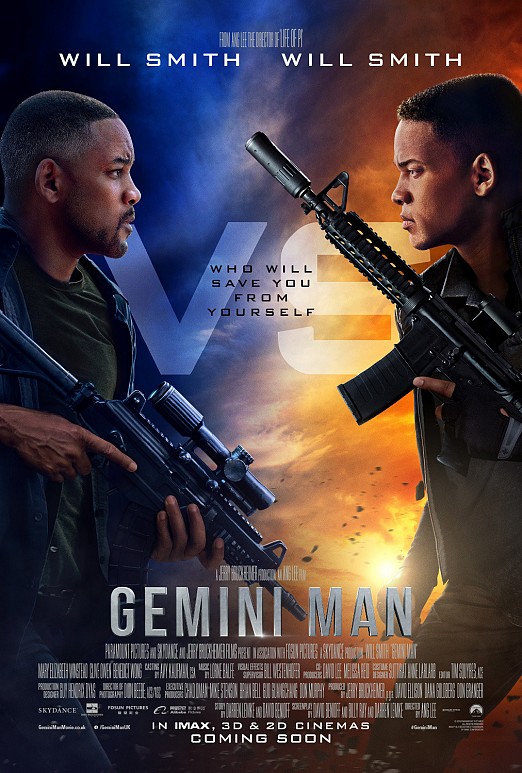 One must give respect to Ang Lee for an amazing one-of-a-kind take on an action thriller that you can still feel has its own style. Lee's vision and execution whether in establishing, dramatic,and action scenes is nothing short of eye-candy with just the right editing tempo and rhythm. It's always an attraction to me to have in action and adventure movies what i call 'breather' scenes where things slow down, between action scenes. In this one we get intriguing dialogue and breathtaking landscape scenes, very James Bond-like, especially with Henry and company's globe-trotting, accompanied with an orchestral score unlike your usual action soundtracks. Gemini Man certainly has its fair share of such scenes, I reckon Ang should definitely make another superhero movie and/or a James Bond movie. Pretty much it's safe to say the set up starts strong until Henry meets up with Junior and it becomes rather repitious from there on but it is Will Smith's and the rest of the cast's performances that come to the rescue and keep the movie alive and kicking. Gemini Man does have its flaws and weak attributes. The mocap of Junior and the CGI of the some of the action scenes felt off to me, too much like a video game, kind of reminded me of Sam Raimi's Spider Man and you would think that this concept has evolved since then, Junior's face was too soft almost as if somebody photoshopped Will Smith's face and the mocap of the end scene was laughable. Story wise, I kind of analysed and deducted what the writer was going for, i guess he wanted to give this action thriller a different dramatic approach in comparison to the common action narrative or formula of good guy kills bad guy, hence, the focus was placed more on the relationship between Junior and Henry and the moral and emotional implications of being part of one another rather than just dismissing Junior as an evil byproduct and just going after Varris and trying to destroy him and his plans and that's where i guess the film felt flat and weak and did not sit right with most people, perhaps they felt there was too much drama for an action movie, for me i actually liked it and empathised with Henry and Junior and their dilemma but i still think the end scene was a tad too much for the tone of this movie in which Henry checks up on Junior in college, this felt like a scene from a light social comedy. As far as the movie's failure to make money and being resented by a lot of critics and audience members, I really feel most of the time that the American audience is a schizophrenic one ... liking one style of movie and then hating the same style in another movie, I say this is still a very intriguing and suspenseful action thriller with a little bit of heart, morality, and ethics. I enjoyed it alot all the way through.