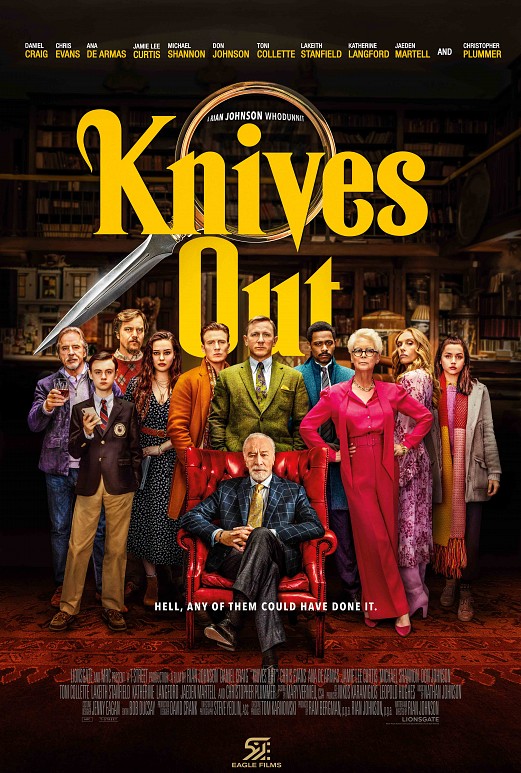 A whodunit filled with laughs and gasps! - 8/10

Performances: 9/10
Screenplay: 8/10
Costumes/Makeup: 8/10
Editing: 7/10
Cinematography: 8/10
Score/Soundtrack: 8/10
Entertainment Factor: 8/10
Verdict: When it was announced that Rian Johnson's follow up to "The Last Jedi" was going to be a whodunit starring a cast of A-listers, I was instantly sold. Anyone who knows me is aware of my admiration for that particular genre, and it was to my immense pleasure that Johnson delivered what is probably my favorite since Tarantino's "The Hateful Eight".
The tone set by the acclaimed director is one that is reminiscent of the whodunits of the 1970s and 1980s ("Clue", "Murder on the Orient Express"). In fact, Daniel Craig's detective Benoit Blanc was clearly inspired by Hercule Poirot, and yet the film never really felt like a rip-off of any of Agatha Christie's adaptations. Rian Johnson figured out how to adjust the story to modern times and make it his own, blending comedy to an investigation that will have you gasp at every turn. But Johnson isn't the only person to thank for what were perhaps the fastest 130 minutes I experienced in theaters in quite some time, as the cast, and mainly Craig, Evans, and de Armas, were all fantastic in their respective roles. The production design was also outstanding and truly did remind me of the New England mansion that served as the setting for "Clue". I have but a few issues with the film, mainly in its way of using flashbacks and conveniences to move the plot along, but overall I can safely say that I had a blast watching it and I'm already looking forward to revisiting it again in the future.
FINAL GRADE: 8/10
SOURCE: https://moviesgraded.blogspot.com/2019/12/knives-out-2019.html