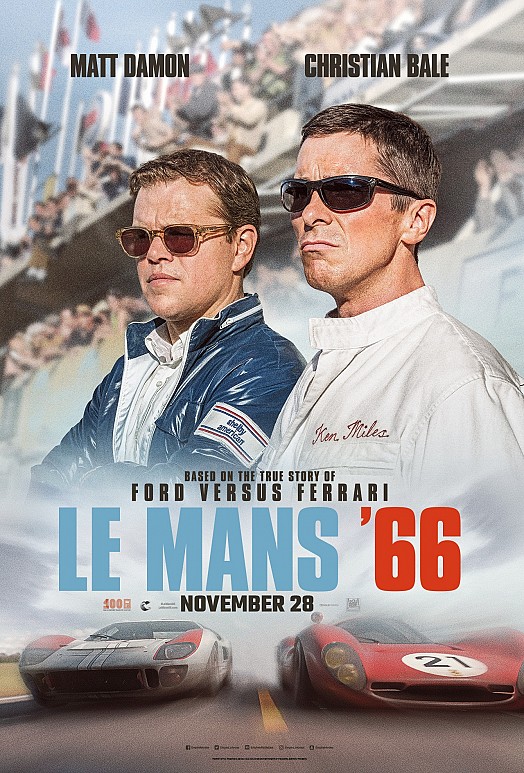 Performances: 8/10
Screenplay: 6/10
Special Effects: 5/10
Costumes/Makeup: 7/10
Editing: 7/10
Cinematography: 6/10
Score/Soundtrack: 5/10
Verdict: Fresh off Logan's resounding success a couple of years ago, James Mangold is back behind the camera for what is considered by many to be a front-runner at next year's Academy Awards.
"Ford v Ferrari", also known as "Le Mans '66" in some parts of the world, tells the true story of the legendary rivalry between the two titans of the automobile industry on the car racing field during the 1960s with a focus on the two men at the center of it: Carroll Shelby and Ken Miles, portrayed respectively by a fantastic Matt Damon and an (as usual) unrecognizable Christian Bale. The two performances, as well as the interesting subject of the film, made the watch a light and entertaining one, but the story's dramatization stopped it from being a great film to me. Despite some nail-biting moments thanks to near-perfect editing techniques used during the racing scenes and a general atmosphere that very well replicated the decade in which the events take place, I was let down by the cheesy, even at times goofy, script. The dialogue was questionable, some of the characters felt like caricatures, and some relationships and rivalries were simply impossible to take seriously. The score by Beltrami and Sanders never elevated any of the scenes and added more to the goofiness of the film rather than its seriousness.
"Ford v Ferrari" has all the elements that constitutes a crowd pleaser, but failed to impress on a technical level. It's certainly a fun ride, but unfortunately not one I'll be running to revisit any time soon.
FINAL GRADE: 6/10
SOURCE: https://moviesgraded.blogspot.com/2019/11/ford-v-ferrari-2019.html