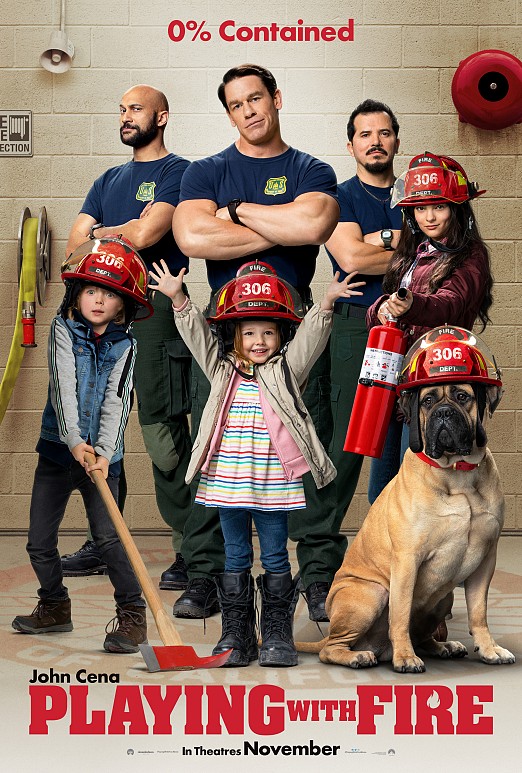 Certainly not good, but entertaining enough - 3/10

Performances: 4/10
Screenplay: 2/10
Editing: 6/10
Cinematography: 4/10
Score/Soundtrack: 2/10
Entertainment Factor: 6/10
Verdict: Are you looking for an insightful look at the lives of firefighters as they risk their lives to save civilians? Look elsewhere. Now are you looking for a (very) light comedy in which John Cena appears shirtless on more than one occasion and flosses to a BTS song? Then "Playing with Fire" is exactly the film you're searching for!
Produced by Nickelodeon, it's very clear that the targetted demographic is a much younger one than the one I belong in. But damn it, despite all the cringe-worthy attempts at recycled and repetitive jokes and the predictable nature of its narrative, I'd be lying if I said that I didn't have some sort of fun watching the movie. And that is mostly thanks to Cena's comedic performance, who gives the word boomer a whole new meaning that is so ridiculously over the top that you can't help yourself but giggle at the ridiculousness of it.
"Playing with Fire" is not a good movie, but sort of falls in the category of the so-bad-its-good genre. It's cheesy, repetitive, unoriginal, and unspecial in every aspect, but if watched with the right audience, I can see it bringing laughter to many people looking for a not-too-serious flick.
FINAL GRADE: 3/10
SOURCE: https://moviesgraded.blogspot.com/2019/11/playing-with-fire-2019.html