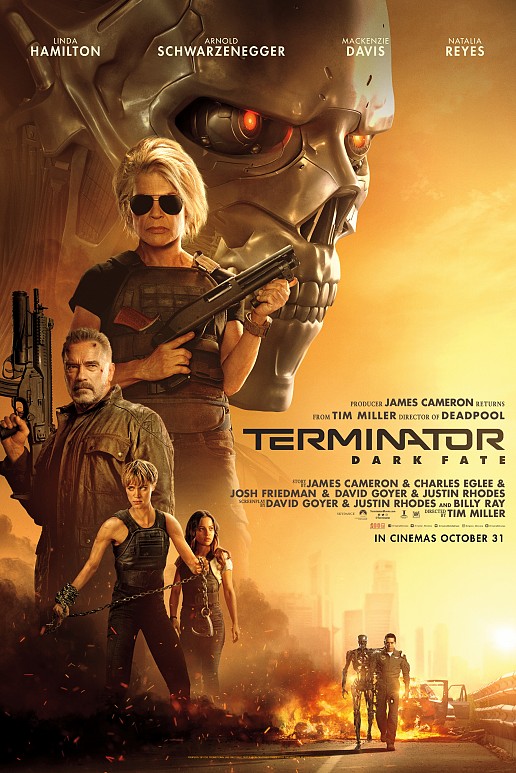 A decent action flick, Terminator: Dark Fate may not have the most original or well-written script but it sure does deliver some heavy action-packed scenes! It pretty much delivers on its promises and despite numerous rehashed ideas, it’s pretty enjoyable.

This movie serves as a direct sequel to the exceptional ‘Terminator 2: Judgement Day’ and disregards everything that went on in those godawful sequels, that being definitely for the best. It also sees the return of Linda Hamilton as Sarah Connor after a 28 year absence from the franchise. The sixth entry in the Terminator franchise doesn’t flow so smooth or without its flaws but does manage to remain a step ahead of your typical popcorn flick. ‘Terminator: Dark Fate’ follows Sarah Connor and a hybrid cyborg human, who is sent on a mission from the future to protect a young girl from being terminated.

The movie kicks off with a haunting message and an opening scene that helps viewers understand what (officially) happened after Judgement Day. The first act may feel confusing at first but then gets straight down to business with an action sequence that leaves you on the edge of your seat. In fact, almost all the action scenes are well choreographed and include a high level of intensity, and that’s the movie’s strongest asset. However, what negatively affects the overall tone is the dull and lackluster script that rehashes a bunch of ideas from the previous films and features some terrible dialogue that’s immensely cringe-worthy. A few too many plot conveniences also didn’t help.

It was really nice to see Linda Hamilton back in action and definitely projects her badass character onscreen but doesn’t really shine within the muddled story. Mackenzie Davis felt somewhat miscast but manages to do a decent job despite her atrocious lines. The T-800 himself however had a great onscreen presence. The movie does lose its pacing after the first act and at many times turns slow and dull but in the end it manages to balance it all out. The climax itself was really entertaining and seemingly puts an end to a franchise that should’ve ended with the second movie. Overall, I think fans of the series will be pleased with the action-packed story as long as they don’t have terribly high expectations.