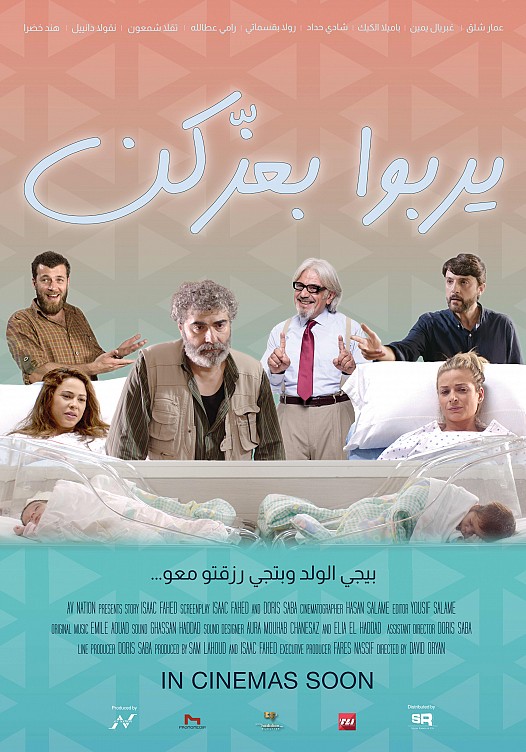 A Social Comedy centered on two couples from extremely different social & financial background, unwillingly meet in the same hospital’s maternity room after delivery, where the rising actions goes completely out of control and unpredictably thrilling second by second.

What a timing!! And With everything going on in our country these days, this film just gains a whole new meaning, a meaning that binds together all Lebanese with no exceptions whatsoever!!

In other words, we finally have an authentic Lebanese film that managed to showcase a tiny fraction of our society's problems in a really engaging and sympathetic manner!!

Story wise, and generally speaking, it was filled with emotional and harsh truths that worked as a reminder at how corrupt and perverted our country is. Discrimination, sexism, unity, family, hopes, dreams... All are nothing but a few samples of the numerous themes this story explored on a broad level!!

Moreover, the story progressed easily and the transition between the subplots and the main story was done very smoothly!!

Characters wise, well, besides being written with a dash of hearts and aches, i truly believe that, one way or another, the audience WILL relate to such characters on a really personal level!! These are real people, facing real problems!!! They weren't invented out of nowhere!!!

Acting wise,  C-section includes an All-Stars-Award-Winning-Cast such as Ammar Shalak, Gabriel Yammine, Pamela El Kik, Rola Beksmati, Shady Haddad, Takla Chamoun, Ramy Atallah. In a few words, Pamela El Kik is a vision. No matter the role she portrays, she always nails it. Rola Beksmati, Nothing less than outstanding!! Gabriel Yammine, Legendary!! Ramy Attalah, King!!! This guys managed to dominated each and every scene with his impeccable acting skills and sense of humor!! Shady Haddad, amazing!! But, Ammar Shalak, Im speechless!!! Honestly, the raw emotions he showcased while performing is simply PHENOMENAL!!!!!!

And of course, everything from the cinematography, to the camerawork, to the color palette and the soundtracks were really well taken care of and created a visually and a sonically entertaining and satisfying cinematic experience!!

My only criticism is that the ending was a bit cliché. It was, in a way, predictable. I would've liked to see an alternative ending but, guess what, that wasn't a huge deal!! Because the overall atmosphere was really good and emotional!!

C-SECTION يربوا بعزكن is  definitely A film to fall in love with.