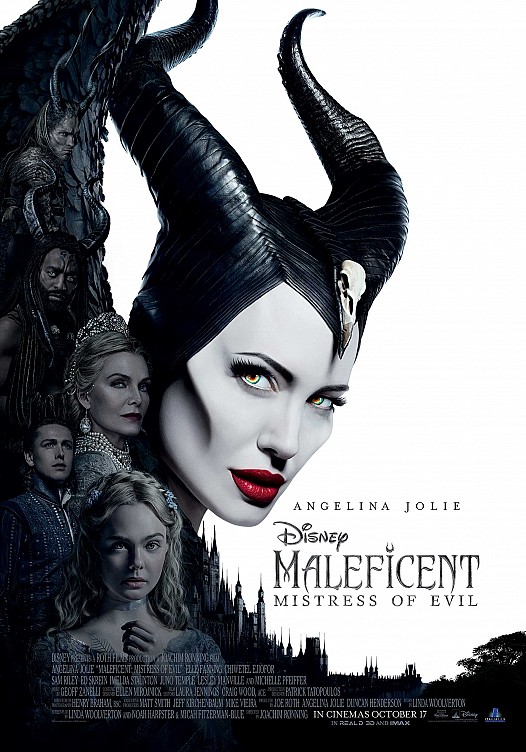 What I witnessed yesterday was a mesmerizing act driven by fluffy, sparkling, cute, strong, dark and vicious creatures harmoniously taking part on the big screen.

The land of the Moors was in imminent danger of being swept away by the cruelty of humans after they managed to mess up the relationship between Maleficent and Aurora. But there was a bittersweet feathery addition which drastically changed the course of everything.

Angelina Jolie was beyond magnificent!!! Her Devilish/Delicate/Invincible/Mushy sides radiated from her eyes and were flawlessly seen in that wild embodiment. Elle Fanning was what I will sum up with "a cinematic eye candy"! She delivered an edible princess-y performance. And of course, Michelle Pfeiffer's body language and facial expressions were as perfect as ever.

What got me glued most to the big screen was those enchanting costumes and that divine makeup!!! So damn detailed and marvelously colored, drawn or even applied in a way that makes them scream with words without the need of a script. I was living a true fairytale.

Soundtracks were spot on and CGI was just impressive. The insertion of humor was an added value to the whole show. Script might not be the smartest out there but certainly the fuzziest. Runtime was somehow prolonged which others might have found as detaching BUT it honestly didn't bother me.

This sequel will step into theaters tonight and believe me that it is going to mark its existence. Maleficent: Mistress of Evil is worth every minute of your time.