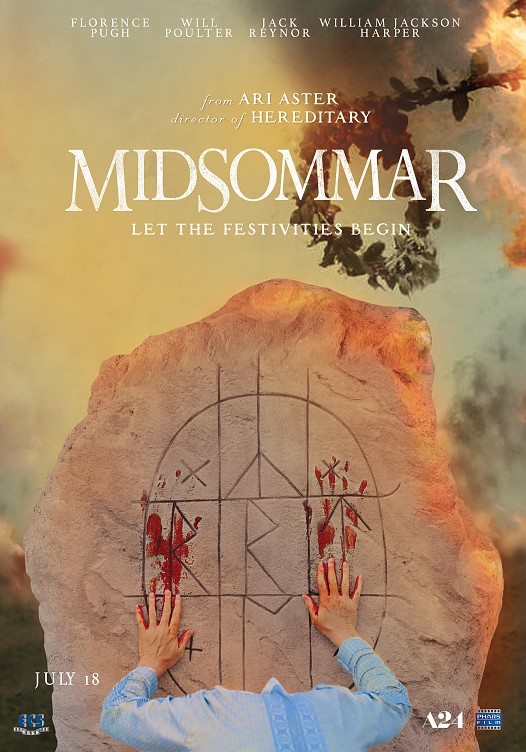 A couple travel to Sweden to visit their friend's rural hometown for its fabled midsummer festival, but what begins as an idyllic retreat quickly devolves into an increasingly violent and bizarre competition at the hands of a pagan cult.

Ari Aster is a freak of nature. If you liked Hereditary's story, I'm sure you're going to love Midsommar' even more. The story was filled with mind blowing metaphors. What I loved most was that, from the beginning, Ari hadn't hold back on the mind games and as the movie progressed, it just kept on getting darker and more sinister, until you've guessed it, the huge finale. But, if you're expecting this film to be like your average horror film, well, you'll be disappointed. It will slowly creep you out, with its unorthodox methods and disturbing/gruesome storytelling techniques. Its one hell of an unsettling film, that resembles nothing like we've seen this past year.

And of course, with such intense and multilayered story, and for the film to work properly, we must have some decently written characters with impeccable character development and emotional depth. And luckily, this was the case. Each character (especially the lead) managed to have its own share of the story. The amount of detail attention that was put into each and every character was seriously spot on. We had depths, emotions, psychological residue, complexity, hardship... And so on.

You know that with such complex and diverse characters, you must seriously find the right actors to portray them!! This film's cast is relatively unknown but thats not a problem because the performance each one gave, is flawless. Vilhelm Blomgren, Will Poulter and Jack Reynor were really interesting to watch. But, Florence Pugh is the true star. The way she managed to transform her character into a living emotional entity that breathe pain and violence, is simply out of this world. One of the best performances and most sincere for that matter, that I've seen all year.

In addition, the entire vibe of the film was set from the very beginning. It was haunting, dark, disturbing, unsettling, intense and shocking.... I mean you will literally be sitting there disgusted with what you're watching but at the same time impressed and loving it.

And the cinematography, purely poetic. Each frame, angle and scene was like a work of art. The camera work is superb. I wasn't watching a normal film. No, I was watching a chef d'oeuvre that kept on getting darker and darker and better as the film progressed. Plus, the transition between the scenes was so smooth, it was dreamlike.

And those visuals. Through them, I was transported into a colorful utopia filled with flowers and eye popping colors. And Last but not least the soundtracks, generally speaking, i was sonically blessed. Absolutely recommended!!!