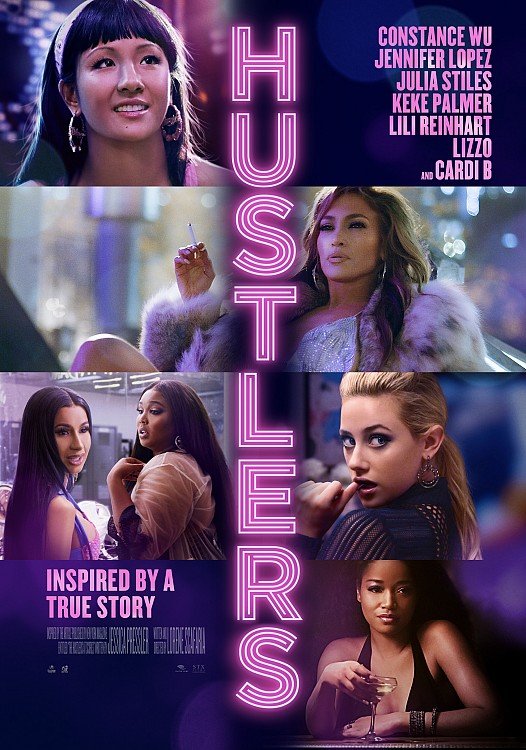 Working as a stripper to make ends meet, Destiny's life changes forever when she becomes friends with Ramona -- the club's top money earner. Ramona soon shows Destiny how to finagle her way around the wealthy Wall Street clientele who frequent the club. But when the 2008 economic collapse cuts into their profits, the gals and two other dancers devise a daring scheme to take their lives back.

The hype is real you guys!!!! HUSTLERS is, undeniably, one this year's best releases and a strong contender for the 2020 awards season.

Genius,compelling, immersive, clever, humorous, entertaining.... All of these and more are just a sample on how to properly describe this Cinematic achievement!!

The story itself was infused with a great amount of female empowering messages (and in some points just empowering messages in general). Well after all, its an all female lead cast, so this was kind of expected!!! But, I think Director Scafaria might have taken it a bit too far by portraying Rich Men as Monsters (yes, it there's some few exceptions but what i mean is that with the female characters , we had a very acute emotional representation, but with the men on the other hand, not so much?!!!!)

And more surprisingly, the story was way more emotional than I expected. At the end, its just a story about struggles, insecurities, trying to make it against all odds, ITS ABOUT EMPOWERING!!!!!

The thing that attracted me most to this film is that it managed to free and distinguish itself from the stereotypes of such films. Of films based on strippers. It could've easily turned into a fiasco but luckily it didn't and we have Lorene Scafaria to thank!!

All the Characters were driven by ambition and written just perfectly!!! Constance Wu's Destiny emotional range and depth was really heart-warming. Jennifer Lopez's Ramona which represents this Fierce, Strong and daring woman that will not let anything stand in her way is, in a way, inspiring to both men and women!! Generally speaking, this film's characters were really multilayered and multidimensional. They were dancers, mothers, sisters, daughters.... They were Hustlers.

The acting was simply superb!! JLo and Constance, literally gave one daring, provocative, splendid & FIERCE performance. Totally award worthy and deserves all the buzz they were getting from the day this film was released.

Cardi B was like a breeze of fresh air. Keke Palmer and Lili Reinhart as well. But and this is where I was a bit disappointed, when you have a trio like Cardi, Keke and Lili, you dont try and keep them on the sides. No. They should've been front and center, alongside JLo and constance, the entire time!!!!!

The Soundtracks worked nicely with the whole ambience of the film. And matter of fact, they also helped in maintaining a fun, light and kind of suspenseful vibe.

But what bugged me a bit was the pace. The first and final act's pace was good. Kept me focused the entire time. But somewhere in the middle the pace was too slow and i felt a bit bored!!!

But, you know what?? HUSTLERS is definitely a movie we didn't know we needed!! Its provocative, clever and entertaining!! Highly recommend it!!