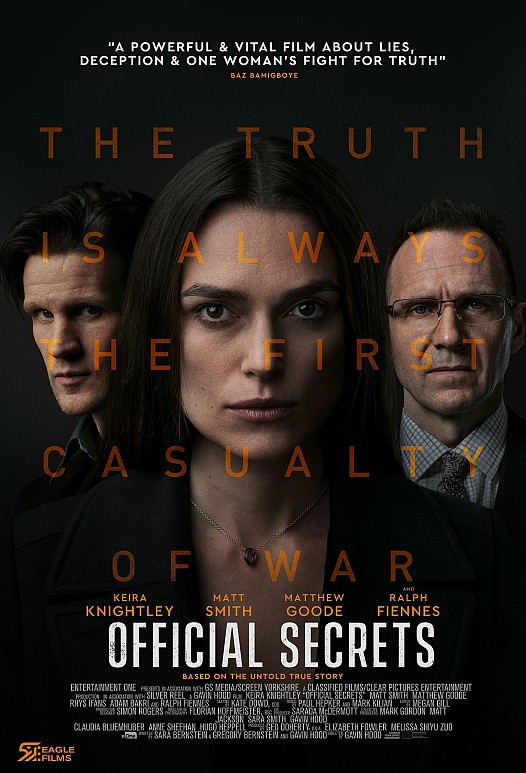 A riveting political thriller that tells a fascinating true story - 7.5/10

Performances: 4/5
Screenplay: 4/5
Editing: 4/5
Cinematography: 3/5
Score/Soundtrack: 3/5
Verdict: When Gavin Hood's name is uttered, most people immediately associate it with the atrocious "X-Men Origins: Wolverine" that he directed a decade ago. However, the director found a new interest in political thrillers as of recently, and I have to admit that I'm loving the new direction he's taking.
Back in 2015, Hood released "Eye in the Sky", a thriller I loved much more than I thought I would and one of my personal favorite films of that year. 4 years later, his new project, "Official Secrets", shares undeniable similarities with the first, and once more, I was very pleasantly surprised by the final product. About Katharine Gun's leak of a top secret document that exposed an illegal operation orchestrated by the NSA, the film sees Keira Knightley shine in the lead role, in which she beautifully juggled between fear and pride. Most of the supporting cast, which consists of names such as Matt Smith, Ralph Fiennes, Mattew Goode or Rhys Ifans also do a great job, with Adam Bakri being the only actor whose performance as Katherine's husband Yasar  I couldn't entirely take seriously. As a film, "Official Secrets" didn't really offer anything new on a technical level, but that is most certainly eclipsed by the fascinating true story told, centered around the worlds of politics and journalism. Despite finding a few elements to be a little too oversimplified or a bit sloppily transmitted to the public, I was invested in the case from beginning to end, even looking it up as soon as I left the theater.
"Official Secrets" is no cinematic masterpiece, but definitely delivers on its promise. It's a worthy follow up to Hood's "Eye in the Sky" and I cannot wait to see whose story the filmmaker's going to tackle next.
FINAL GRADE: 7.5/10