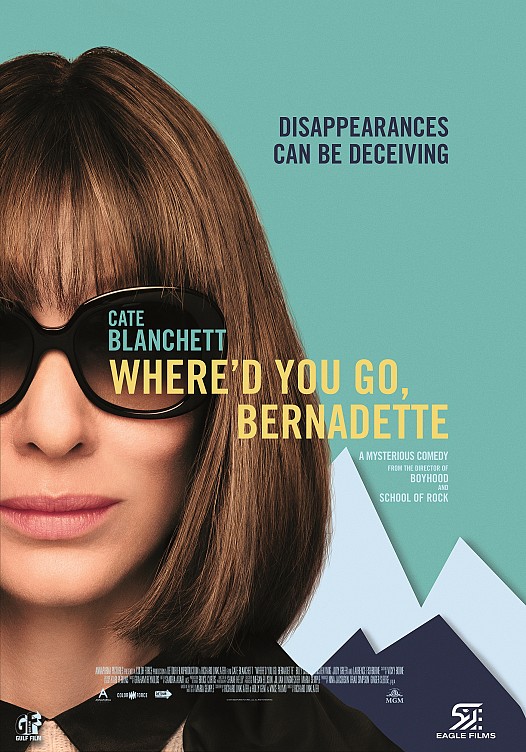 A heartwarming drama comedy with an inspiring message. - 7.25/10

Former architect Bernadette Fox seems to have it all -- a beautiful home in Seattle, a successful and loving husband, and a brilliant teenage daughter who's about to attend boarding school. When Bernadette suddenly disappears without a trace, her concerned family sets off on an exciting adventure to solve the mystery of where she might have gone.

Where'd You Go Bernadette is a heartwarming comedy that we all can learn a thing or two from.

Cate Blanchett's mesmerizing performance is absolutely out of this world. The way she portrayed her character, through the ups and downs, through the emotional breakdowns and happy moments, is simply award worthy. The amount of hard work and emotions that she has put trying to animate her role cant and hopefully will not go unrecognizable. In addition, her character's story arc was really well written, even though we could've explored some more bits of her personality but still. By far the best aspect of this whole film.

The story, well, you need alot of patience to through such story because it was really slow and nothing really exciting happens, and at some points totally lacked any sense of direction. But if you stick around, trust me the end result will be satisfying. (although i kinda feel that the story ended out of nowhere and we needed a bit more).

The message that this film tries so hard to deliver is absolutely inspiring. Artists should create art. Musicians should play music. Architects should create architecture.... When you lock someone out of his own element, or environment, you help by killing him, piece by piece until he/she snaps. Everyone was born with a specific purpose in this life. Who are you to prevent him from fulfilling such purpose?? Soo yess, i personally found this really inspiring.

Hala2 regarding the cinematography, camera work, they weren't on the same level as the story/acting but they weren't totally bad either. The color palette is absolutely amazing. Catched my eyes from the first scene.

Where'd You Go Bernadette, slow or not, good or bad, will one way or another make you learn a thing or two about yourself or even the world around you that you probably never new, and in my book, This is a win!!!

DISCLAIMER : MY REVIEWS REPRESENT MY OWN PERSONAL OPINION REGARDING THE MOVIE, HENCEFORTH YOU MIGHT AND PROBABLY WILL DISAGREE WITH IT.