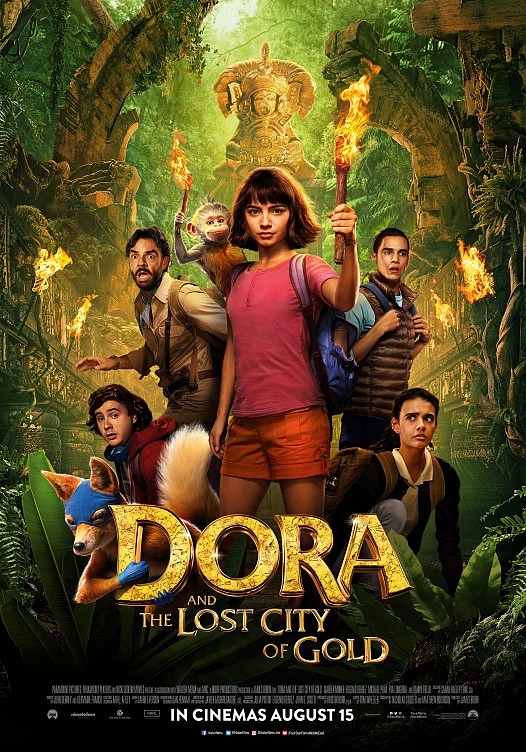 Performances: 3/5
Screenplay: 3/5
Special Effects: 2/5
Costumes/Makeup: 3/5
Editing: 2/5
Cinematography: 2/5
Score/Soundtrack: 3/5
Entertainment Factor: 3/5
Verdict: I am not a child. I don't know what children like nowadays, and I sure as hell don't know if they'll enjoy "Dora and the Lost City of Gold". I watched it as an adult and I will review it from that perspective. And yes, I'm a full-grown adult who willingly went out of his way to watch a live-action Dora movie... and I don't regret it one bit.

Is the movie a masterpiece? You know it's not. I mean, it does follow a certain formula filled with clichés typically found in movies aimed at a younger demographic, the CGI was atrocious, not all of the jokes landed, and there were a couple of characters that I found to be annoying. But is it a perfectly enjoyable way to spend an hour and a half? Well... I'd say yes. I found myself having a much better time than anticipated for two main reasons: Isabel Moner's performance as Dora, who turned what could've been an incredibly annoying character to a very likable and charming one, and the fact that it was clearly self-aware of its nature. The film understands how ridiculous a Dora movie sounds, and instead of playing it safe by making it a boring adventure movie à la "Tomb Raider", decides to take advantage of that ridiculousness and use it to its profit, and I'd be lying if I said that it didn't work.
"Dora and the Lost City of Gold" clearly is far from perfect, but I did laugh more than I was anticipating to. It's filled with charm and heart and definitely ends up becoming its own thing. Definitely my favorite live-action adaptation of previously animated material to come out this year.
FINAL GRADE: 5/10