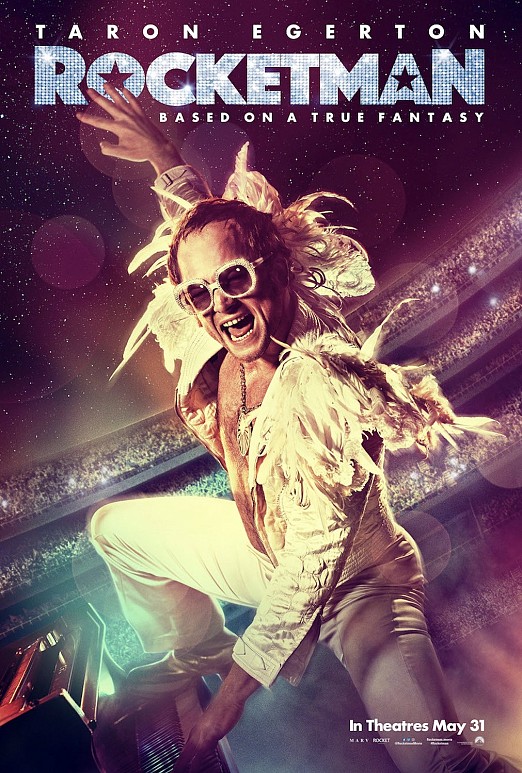 Performances: 5/5
Screenplay: 4/5
Costumes/Makeup: 5/5
Editing: 4/5
Cinematography: 4/5
Score/Soundtrack: 5/5
Verdict: As I'm writing this review, "Rocketman" sits at the top of my list of best movies of the year. It may not be a huge achievement given the quality of this year's blockbusters, but it's an achievement nonetheless. An achievement that is the fruit of a second collaboration between director Dexter Fletcher and star Taron Egerton, after the very pleasant surprise that was "Eddie the Eagle".
This time, the pair teamed up to tell the story of Elton John, an eccentric man who was not only a musical genius, but also one of the biggest showmen of his generation. The result, despite following a formulaic narrative we've seen a bunch of times in the past, perfectly reflected Elton's personality. It was a crazy, gigantic, colorful, almost dream-like show that explored the musician's childhood, upbringings, rise to fame, relationships with his entourage, sexuality, and multiple addictions. Taron Egerton delivers a career-best performance as Elton John that will generate a lot of talk during award season. Just like the poster suggests, he becomes Elton John in the movie and I completely bought him in the role. The rest of the cast, which includes Jamie Bell and Richard Madden did a great job as well. The soundtrack is as expected phenomenal, and so was the costume design.
It truly sucks that I couldn't watch this movie in theaters as the scenes that deal with his sexuality were cut since I live in a country where homophobia is still unfortunately not only tolerated but also glorified, but I'm glad I got to experience the movie in its entirety even at the expense of waiting a couple of months to finally be able to. If you haven't already, definitely seek this one out!
FINAL GRADE: 8/10