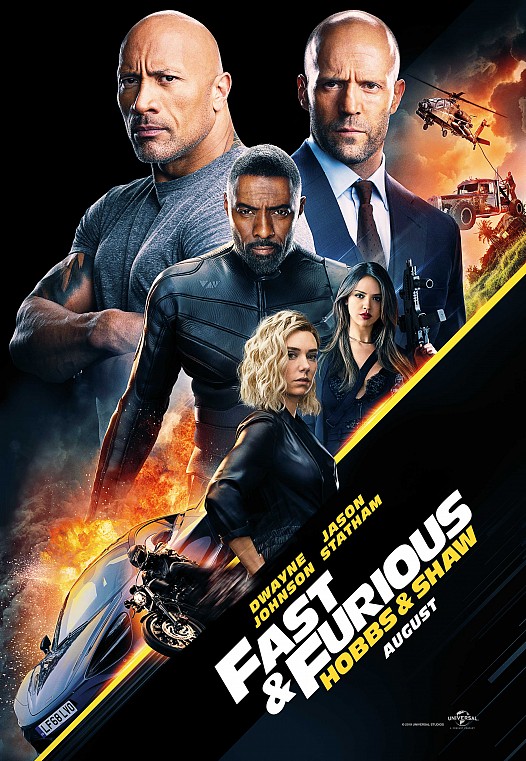 Performances: 3/5
Screenplay: 3/5
Special Effects: 2/5
Editing: 2/5
Cinematography: 3/5
Score/Soundtrack: 2/5
Entertainment Factor: 3/5
Verdict: The trailer promised an over-the-top action flick fueled by a love-hate relationship between the two leads, resulting in a very dumb but also very fun entry in the Fast & Furious franchise. And while there definitely were a few scenes that checked these boxes, it wasn't nearly as entertaining as I was expecting it to be.
Directed by David Leitch, "Hobbs & Shaw" follows charismatic leads Dwayne Johnson's Luke Hobbs and Jason Statham's Deckard Shaw in their quest to protect Hattie from the nefarious Brixton, respectfully played by a badass Vanessa Kirby and a genetically enhanced Idris Elba.
To be quite honest, I was particularly looking forward to this movie because of what the trailer promised. I wanted to watch a more than ever self-aware spin off in the Fast & Furious franchise that contains cool action set pieces and is led by a duo who's chemistry was a standout in previous installments. The fact that David Leitch, who prior to it directed "Deadpool 2" and "Atomic Blonde", was attached gave me even more hope that this was the direction they were taking with it. And while there were a few funny exchanges and a couple of hilariously extravagant stunts (most of which are included in the film's trailer), I can't really say that anything else impressed me. The movie was way too long and way too dull when the focus was to progress a narrative I didn't care about at all. On a technical level, the cinematography and score don't add anything to the flick, and the CGI and editing, especially during the fight scenes, were extremely distracting. I did laugh a few times but was ultimately bored for most of the movie, which says more than enough about its entertainment value.
I haven't really enjoyed any entry in that particular franchise, and "Hobbs & Shaw" certainly didn't change my mind about it. And that's frustrating considering the fact that all the ingredients were there to make it a much more memorable than the previous installments. At the end of the day, I had more fun watching the trailer than the actual movie, and that's really a shame.
FINAL GRADE: 4/10