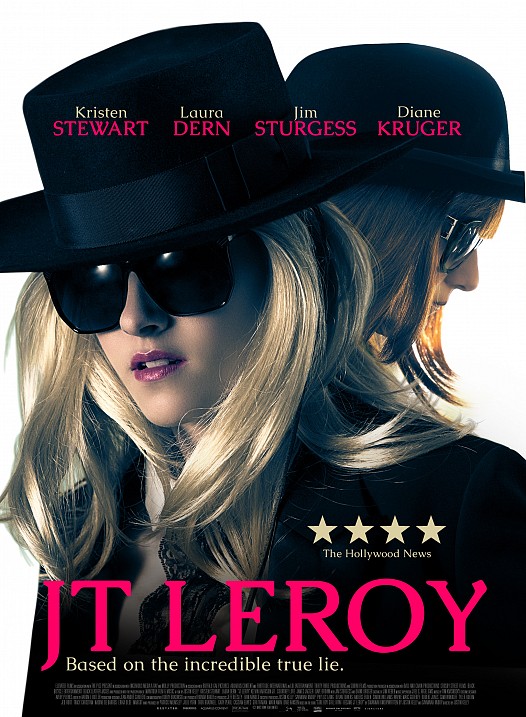 Performances: 4/5
Screenplay: 3/5
Costumes/Makeup: 3/5
Editing: 3/5
Cinematography: 4/5
Score/Soundtrack: 2/5
Verdict: Based on a quite fascinating true story, "JT LeRoy" tells the story of Savannah Knoop, who spent 6 years playing the body of Jeremiah Terminator LeRoy, a famous author and pen name of her sister-in-law Laura, played by Laura Dern, who provided the voice of the character behind the scenes.
To be perfectly honest, I found the story told to be more captivating and interesting than the movie itself. It's not a bad film by any means. In fact, it's pretty well shot and well acted overall, but it sadly lacked so much personality that it ends up being something I probably won't remember in a few weeks' time. It felt like the adaptation of an article rather than a novel, and only provides the audience with an overview of the lie told by the two women rather than a deeper exploration of their characters and elaborate plan, which in my opinion could've been infinitely more interesting. There were also a few scenes that were difficult to take seriously as the lines fed to the actors lacked subtlety. The goofy and quirky score caught me off guard a few times as well, taking me out of a movie that never entirely pulled me in in the first place but still managed to pique my interest as I genuinely found the story to be gripping.
In the end, I didn't know about the story of JT LeRoy, and now I am. And that's pretty much everything I can take out of the movie. I certainly still recommend it to people who are looking for a film that focuses on substance over style, but I personally wished it took more liberties as a movie to make me even more intrigued by the events.
FINAL GRADE: 6/10