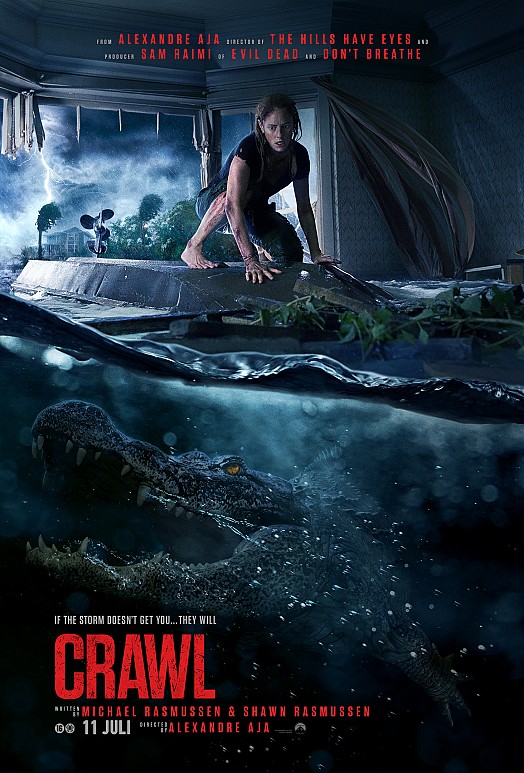 Performances: 2/5
Screenplay: 1/5
Special Effects: 2/5
Costumes/Makeup: 3/5
Editing: 2/5
Cinematography: 3/5
Score/Soundtrack: 2/5
Entertainment Factor: 2/5
Verdict: Set in Florida, "Crawl" stars Kaya Scodelario as Haley, a young swimmer trapped in a basement with her father and a couple of alligators during a Florida hurricane. Yes, it's a dumb premise that has been done to death in the last 20 years, but the setting and Sam Raimi's involvement as a producer led me to believe that it was going to be a self-aware parody of the genre, paving the way to an entertaining and hilarious flick.
Alas, we got none of that. Director Alexandre Aja ("The Hills Have Eyes") instead opts to make what can be best described as a horror movie for children. It's an 87 minute borefest of a movie that took itself way too seriously and where absolutely nothing happens for an hour apart from a couple of cheap jumpscares and an attempt to develop two extremely bland and dull characters I didn't care even a little about. The film is a mixture of overdone clichés and conveniences that make absolutely no sense whatsoever and in which, for instance, the protagonist is the only character immune to alligator bites (a reptile notorious for having one of the most powerful bite force in the animal kingdom) and characters constantly make idiotic decisions only aimed at setting up the following scene.
I would've forgiven all that had "Crawl" taken itself way, way less seriously similarly to the "Sharknado" franchise, but unfortunately that clearly wasn't the case. It's a movie made for edgy 12 year old kids who want to brag about watching it in front of their friends. As for me, I was struggling not to crawl out of the theater and ultimately walked out of it missing a couple of IQ points.
FINAL GRADE: 2/10