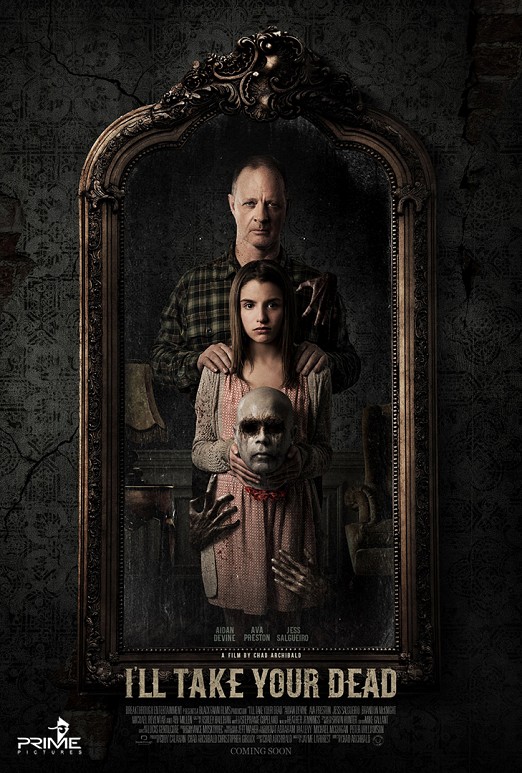 Performances: 2/5
Screenplay: 1/5
Special Effects: 2/5
Costumes/Makeup: 2/5
Editing: 2/5
Cinematography: 3/5
Score/Soundtrack: 2/5
Entertainment Factor: 3/5
Verdict: Let's be honest here, no one's going to watch this movie expecting it to be the next "Exorcist" or "Psycho". People who'll watch it, including me, will probably want a short, fun horror flick to watch with a bunch of friends with their brains completely turned off, and "I'll Take Your Dead" kinda checks these boxes.
I say kinda because yes, the film was short (clocking at only 83 minutes), light, and if watched with the right mindset, fun at times. The dialogue, acting, script, editing, and scares were all so clumsy and mishandled that they did result in a few laughs at certain moments. I mean, how can you not laugh when the villain in the movie has the word Evil tattooed on his face or when an actress realizes mid-sentence that she was uttering the incorrect line and corrects herself before the director yells cut? The supernatural aspect in the movie adds absolutely nothing to the narrative and it's clear that it was thrown in as an excuse to generate a few ridiculous jumpscares. Everything, including the many exposition scenes, was so over-the-top and forced that I genuinely started to question the director's intentions with the movie, asking myself what his ultimate goal was regarding this project.
"I'll Take Your Dead" is clearly not a good movie by any means, but one I'd recommend checking out with a group of friends, preferably drunk, who enjoy tearing a movie to shreds. However, if you're looking for a well-made horror flick with a story that makes sense and decent acting, then this is definitely not the movie for you.
FINAL GRADE: 3/10