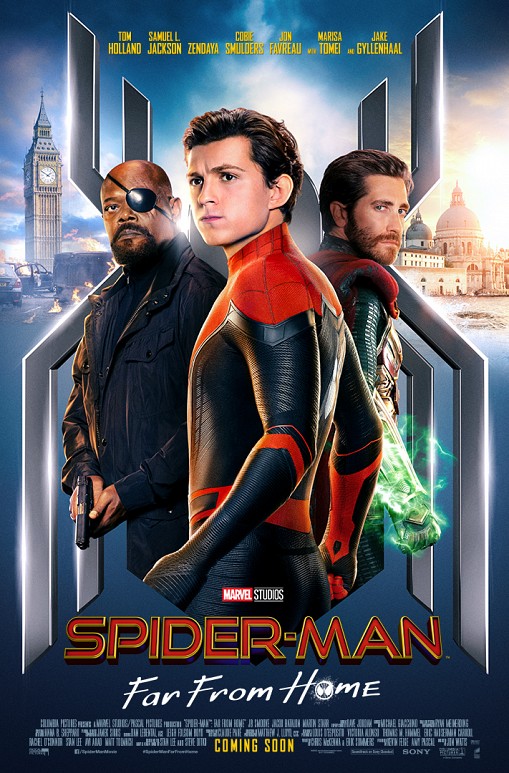 Performances: 4/5
Screenplay: 3/5
Special Effects: 5/5
Costumes/Makeup: 4/5
Editing: 3/5
Cinematography: 3/5
Score/Soundtrack: 3/5
Entertainment Factor: 4/5
Verdict: "Far from Home" is the third entry in the MCU to hit theaters this year (following "Captain Marvel" and "Endgame") and while it did pretty much follow the same recipe we've been accustomed to by now in the Universe, I'd still consider it to be my favorite of the lot.
In it, Tom Holland is back as your favorite friendly neighborhood Spider-Man and has to deal with a bunch of new threats in a post-Endgame world, as well as manage his high school life and romance with MJ, played by a wonderful and charming Zendaya. And while every returning character, which also includes Samuel L. Jackson as Nick Fury in a record third appearance this year as the same character, does a pretty decent job, one man particularly stole the show for me: Jake Gyllenhaal. The Oscar-nominated actor plays Mysterio, one of the most fascinating and fun characters to ever appear in the MCU, also responsible for one of the coolest sequences to take place in any superhero movie I've ever seen.
However, "Far from Home" is still far from being perfect, mostly due to the fact that it never really feels fresh. There were quite a few convenient or exposition-heavy scenes that were extremely hard to buy, and apart from a couple of jokes, the humor felt either recycled, predictable, or forced. The comic relief characters played by Martin Starr and J.B. Smoove were painful to watch and the film did drag at certain places.
In the end, I'd still consider this movie to be a very fun addition to the MCU despite clearly lacking originality. I very much enjoyed the inclusion of Jake Gyllenhaal's Mysterio as he pretty much stole every single scene he was in. Definitely check it out if you're a fan of the MCU and make sure to stay till the very end, as the post-credit scenes left me very excited for the future of the franchise.
FINAL GRADE: 7/10