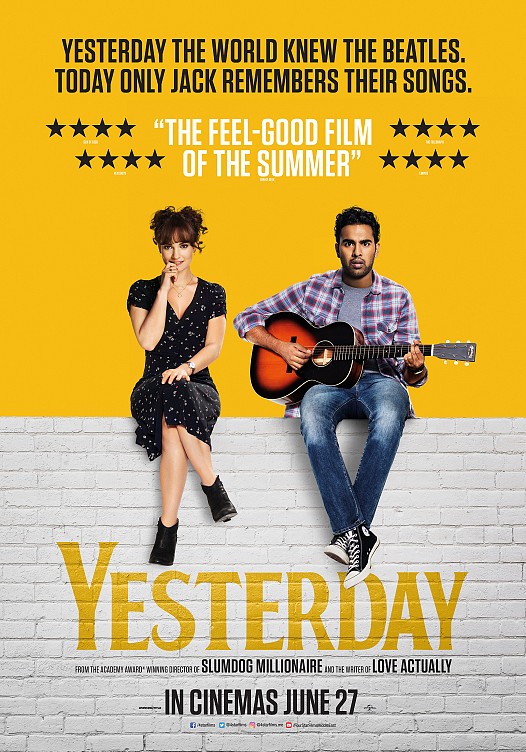 Performances: 3/5
Screenplay: 2/5
Editing: 2/5
Cinematography: 3/5
Score/Soundtrack: 3/5
Verdict: A cool concept doesn't automatically guarantee a good movie, and "Yesterday" is here to prove exactly that.
The film follows Jack Malik, a struggling musician who, after being hit by a bus during a global blackout, wakes up in an alternate timeline in which he's the only person that remembers The Beatles and naturally starts taking advantage of that to boost his career.
Directed by Danny Boyle whose signature style is very much present in the movie, the film stars Himesh Patel in the lead alongside the likes of Lily James, Kate McKinnon, and Ed Sheeran. And while none of them did a bad job, I can't really say that I was all the much impressed with what they did with their respective characters. The chemistry between them was almost nonexistent, most likely due to the fact that each one of them belonged in a different movie. Patel's rendition of the various Beatles songs was nowhere near as memorable as other covers I've heard on YouTube and never struck me as ones I'd ever want to revisit. However, the film's biggest liability was its disappointing, chaotic script that never utilizes the film's concept to its full potential. Instead, it turns it into a silly excuse to make yet another romantic comedy between two bland and at times unlikeable characters in which I didn't care about the romance aspect at all and found the comedy to be wildly inconsistent and very mediocre.
"Yesterday" was a big (and long) disappointment overall. If you want to check it out because you found the concept interesting, you'll most likely walk out underwhelmed. If you want to check it out because you're a Beatles fan, you'll likely enjoy staying home and rewatching films like "Across the Universe" or "Yellow Submarine" more. The only demographic I feel won't be disappointed by Boyle's latest project are, and I never thought I'd say this, Ed Sheeran fans.
FINAL GRADE: 3/10