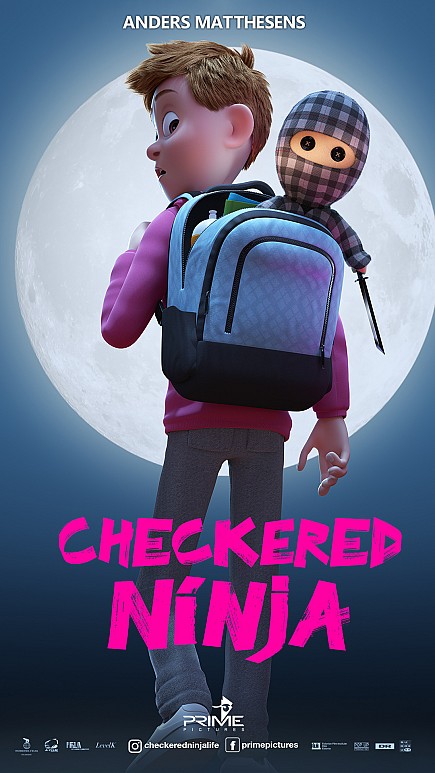 Animation: 3/5
Performances: 3/5 (dubbed)
Screenplay: 4/5
Editing: 5/5
Score/Soundtrack: 4/5
Entertainment Factor: 4/5
Verdict: I really didn't know what to expect from "Checkered Ninja", a Danish animated film about a boy who was gifted a possessed Ninja doll on his birthday. The premise seemed interesting and rather weird but truth be told, I wasn't entirely sold on the film's trailer.
Luckily, all my doubts disappeared as soon as what was going to be an incredibly delightful movie started. Director Anders Matthesen, who also wrote the book "Checkered Ninja" was based on, immediately makes it clear that the film was aimed at more mature audiences, a decision I admired as it definitely elevated the movie's stakes as well as it's humor without ever taking away from its light and to some extent self-aware tone. I laughed way more than I was expecting to at most of the many jokes, ridiculously hilarious songs, and subtle references made by the quite likable characters. The story is pretty straightforward and doesn't really take unnecessary detours to stretch the narrative more than it deserves to be. I'd say that my only issues with "Checkered Ninja" were the animation style that looked a bit cheap (but that was expected considering its small budget, although I would've loved to see it being done using stop motion animation), and a few plot elements I had a hard time buying.
Overall, "Checkered Ninja" was a pleasant surprise from beginning to end. It's a rewarding watch I can totally see myself rewatching sometimes in the future, and a definite recommendation from me.
FINAL GRADE: 7.5/10